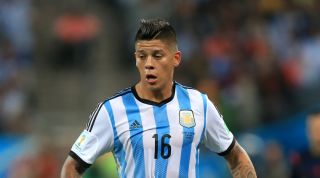 Marcos Rojo's journey from Argentina to Manchester United has been neither simple nor smooth. Lured in December 2010 from hometown club Estudiantes to Spartak Moscow, the then 20-year-old struggled – and a summer 2012 switch to Sporting Lisbon began in similar style.

Rash tackling, suspect positioning and an over-belligerent approach made him a liability at centre-back in his initial displays. Although he looked far more comfortable on the few occasions he was used at left-back, he made a full contribution to literally the worst season in the club’s 106 years of existence.

But in 2013/14, a rejuvenated Sporting finished second, and the night-and-day transition from the previous season was perfectly reflected on an individual level by the Argentine defender. Without losing his bristling aggression, Rojo showed he was intelligent enough to learn from his mistakes and was the club’s most improved player.

He became a pillar and a leader at the centre of defence, utilising his lightning pace to make endless timely interventions. He also became a potent goal threat with his powerful aerial game and thunderous left-foot shot, scoring six goals during the season – before impressing again at this summer's World Cup in Brazil.

Because he's signing for Manchester United. Marcos Rojo is a player perfectly suited to the unmatched physicality and pace of Premier League football. “I always liked English football. I’m sure I’ll adapt quickly to the style of play,” Rojo said yesterday.

His attributes back up that belief. Pacy and powerful, there is no doubt the Argentine will be up to the physical demands of English club football.

Two of Rojo’s foremost assets are his speed and strength. He is also excellent in the air, posing a real threat in the opposition box at set pieces. He has a wonderful left foot which he uses to good effect, firing off thunderous shots and delivering dangerous crosses from the left flank. While the way he forced his move out of Sporting left an unpleasant taste, on the pitch there was never any doubting his commitment was absolute.

Without being a malicious player, Rojo can be reckless in his efforts to get to the ball first, flying into tackles, as attested by 27 yellow cards and five reds in two seasons in Portugal. He has improved this facet of his game considerably, but there is still work to do: he managed to pick up a suspension after just four matches at the World Cup. When playing at centre-back, he has a tendency to be pulled out of position.

Atletico Madrid coach Diego Simeone: “Rojo won the hearts of the Argentines at the World Cup. He was very good both attacking and defending. [Alejandro] Sabella put his trust in him and he responded really well. He had an excellent World Cup and was the best left-back among the four semi-finalists.”

Rojo was the only Argentine named in the Castrol Index Top 11 for the Brazil World Cup.

Opinion is very much split regarding whether or not Rojo’s move to Manchester United will be a success. The defender would appear to have the perfect assets to fit on the left of Louis van Gaal’s desired three-man defence: experience at both left-back and centre-back, pace to burn to cover for lack of numbers, accurate short and long-distance distribution, and unstinting energy and staying power.

He will have to work hard on his positioning and some growing pains are to be expected as he learns the new system, but just as at the World Cup, he could well prove the doubters wrong and do well at Old Trafford.