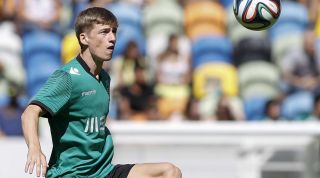 Scottish wonderkid Ryan Gauld started his short career by joining Dundee United’s youth setup at the age of 11 in 2006.

It was at this academy where he learned his trade, and where he began to catch the eye of several suitors from across Europe, initially more so in England. In 2012, he finally got his chance in the senior side, coming on as a substitute in a 2-0 win over Motherwell on the final weekend of the season.

Over the next two campaigns Gauld began to feature more regularly for the Tannadice team, and his form led to call-ups to the Scottish under-19 and under-21 sides for who he has appeared 10 times and once respectively. The attacking midfielder was destined for a move away from Scotland in the summer of 2014, when Lisbon giants Sporting agreed a £3 million deal to take him to Portugal’s capital.

It wasn’t just Sporting who were interested in Gauld, with clubs including Manchester United sending scouts to do their research on the Scottish midfielder. David Moyes insisted on watching him himself in December 2013, although any possible deal appeared to collapse with Moyes’ sacking.

Gauld could also be one of the key factors that helps galvanise Scottish football, which has stagnated over recent seasons. With the 18-year-old heading abroad to hone his skills, he will find himself learning in a greater environment than the Celtic-dominated top Scottish tier. His move could also spark deals for more Scottish talent, with the development of Gauld having repercussions for future stars north of the border.

For such a young player, Gauld’s ability on the ball and in front of goal is what caught the eye of scouts from all over the continent. His composed dribbling has earned much praise, and gives an insight into how deadly he could be once he matures. Up front he is also starting to prove himself, having scored six times for Dundee United last season, and already getting off the mark for Sporting's B team.

He has been labelled the ‘Baby Messi’ by many Scots, partly because of his size (5ft 6in), but also for the glimmers of similarity between the two players, although a direct comparison is unfair at this stage of his career. Like Messi, his height and pace allows Gauld to dart in between defenders, and he was a clear nightmare for the opposition throughout his final season at Dundee United.

His pace and low centre of gravity contributes to his downfall on occasions. Due to Gauld’s slight frame he is often crowded by the opposition, stifling his opportunity to change the game.

Despite seeming to be around for quite a while, the midfielder is still only 18 and this lack of experience has hindered the early part of his career at Sporting, where he plays with the B team after it was felt he hadn’t adjusted to life in Portugal as easily as hoped.

“He’s going to be a massive star in our national team, there’s no doubt about that. I have been fortunate in my career to be working with some really good young players... but, for me, Ryan, you look at him and he’s still like a wee boy, his size there, but he flies into tackles, he goes for headers, and he’s only going to get stronger and quicker.” – Gauld’s manager at Dundee United, Jackie McNamara.

It is reported that in Gauld’s Sporting contract there is a staggering €60 million buyout clause. To say the Portuguese side rate him is an understatement.

With talk of Gauld finding life in Portugal difficult to get used to, the next year will be very important for him. That said, he appears to be well managed by training with the senior side but playing with the B team (to optimise game time), and learning at the same club that developed Cristiano Ronaldo can’t be too disastrous for Scotland’s brightest new star.