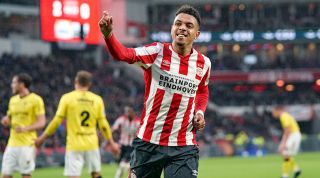 Donyell Malen has truly come into his own since returning to his homeland in August 2017. The forward began his career with Ajax at the age of eight in 2007, before moving to north London as a 16-year-old in 2015.

The Dutchman of Surinamese descent had declined offers from both Manchester United and Chelsea to join the Gunners, inspired by his idol and former Ajax U10s coach Dennis Bergkamp.

Arsene Wenger was a fan of the youngster and Malen was soon featuring regularly for the Gunners’ under-23s, for whom he scored seven goals in 24 matches across two seasons. But that’s as good as it got for him in north London: despite his impressive form at youth level – form which earned him first-team involvement in 2017 pre-season – Malen sought regular senior football and joined PSV Eindhoven for a cut-price £200,000 that summer.

He barely played in his first season but featured off the bench regularly in his second, netting 10 Eredivisie goals as PSV ran Ajax close for the title in 2018/19. Now, however, he’s undroppable – and seemingly unstoppable. Malen has already matched his league haul of last season... after only nine games.

Five-goal hauls are rare, but Malen managed just that against Vitesse Arnhem in September with one fine strike, two penalties and two headers. With it, he became the first player since Dutch legend Marco van Basten 35 years ago to score five goals in an Eredivisie game.

The 20-year-old followed it up with another goal in PSV’s 1-1 draw with Ajax, cancelling out Quincy Promes’ opener at the Philips Stadion, and most recently struck two against VVV-Venlo after adding one more against PEC Zwolle.

Malen has scored 10 goals in nine Eredivisie matches this season, and got three more in the Europa League after only two matches against Sporting CP and Rosenborg. Such form earned him his Holland debut in September, which he marked with a goal against Germany. The young marksman can do no wrong right now.

PSV believe he is already worth £50m according to reports, and former club Arsenal are said to be watching him closely along with Liverpool and Milan.

Goals, goals and more goals. Malen’s impact was immediate at international level: he hit nine goals in only five appearances at U15 level, and later made a strong impression in the U19s with eight goals in 10 appearances.

Standing at 5ft 10in, he is an all-purpose attacker who considers himself able to play in any position across a front three in a 4-3-3 formation. Malen has shown himself to be good in the air, lightning quick, strong and a terrific finisher. His movement off the ball is excellent, too.

Whether he’s leading a quick counter-attack or controlling a ball on the edge of the box, the 20-year-old is cool and considered when thinking about his next move. It’s a byproduct of the footballing intelligence instilled in Malen from a young age: as well as Bergkamp at Ajax, he has had the benefit of working with his idol Thierry Henry at Arsenal’s academy.

For now, the obvious weak spot is his defensive contribution. PSV manager Mark van Bommel would love to see the youngster more involved when the ball is lost in midfield – he hasn’t made a tackle in either the Eredivisie or Europa League this season, and is averaging a mere 0.1 interceptions per game in the former.

If he can improve his work-rate off the ball, PSV will have an all-round asset in their team who can prove to bigger clubs that he is capable of doing more than just score goals.

His current PSV boss Van Bommel has been keen to warn that Malen is still developing, but praised his fine development so far in 2019/20.

"It is great to see how Donyell is constantly entering a new phase of development," he told Algemeen Dagblad. "Last season he was a regular substitute for the winter break. He did a great job.

"After the winter, he started playing his first games in the starting line-up. In the last five games, he was a permanent striker for the first time and this season he is also our No.1 striker. He’s also made his debut for the Oranje. I think everything is good, he is still only 20 years old.”

Earlier in Malen’s career, his then-Ajax U14 coach Brian Tevreden – now chief executive at Belgian side K.S.V. Roeselare after a stint at Reading – likened him to another former Gunner.

“It’s hard to describe him,” he said. “If I have to compare him with a player in the Premier League, he seems a bit like Alexis Sanchez.”

Malen played in the same junior team as Matthijs de Ligt and Justin Kluivert at Ajax, and they remain good friends.

His agent is Mino Raiola, who lavished praised on his young player in 2016. Said the notorious representative: “Gianluigi Donnarumma is in the national team at 17 so he will continue to get better with Italy and AC Milan, Moise Kean is doing well at Juventus, but the one who I am excited about is already with a Premier League club and that is Donyell Malen at Arsenal.”

Asked by an excitable hack about the prospect of scoring 40 goals in a season and continuing at his current rate, Malen was understanably reserved.

“More than 40 goals in one year? Hmm, that’s a lot," he smiled. "I don’t pin myself down on a number, but I’m ambitious. I want to go for the highest total possible. And for now it’s going well.

“When it comes to my finishing, I’m noticing that experience pays. I’m calmer in front of goal than last year. That experience helps with practice. If that’s good, you give yourself more time to think. We train a lot on that.”

Malen is a talented individual who major clubs will be running the rule over closely this term, perhaps more so in Europe and for Holland – where matches are of higher quality and intensity – than in his domestic league. Many Eredivisie starlets have gone before him and struggled at a higher level, but the signs look promising for Malen to avoid the same fate.

QUIZ! Can you name the 52 players to have played every minute of the 2019/20 Premier League season so far?