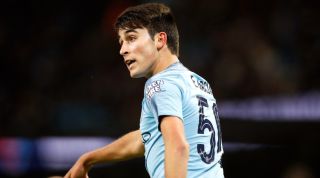 Certain players appear groomed for greatness, and Garcia has enjoyed an aristocratic footballing education. An exciting prospect in Barcelona's youth academy La Masia from the age of seven, Garcia was a perennial captain despite playing in age groups above his own.

The Catalonian excelled so much that he caught the eye of legendary Blaugrana defender Carles Puyol, who snapped Garcia up to his agency before the former’s 16th birthday.

GUIDE Manchester City vs Arsenal live stream: how to watch the Premier League wherever you are in the world

The 19-year-old, a stalwart of Spain’s uber-successful youth sides, has already picked up two youth European Championship gongs. He was forced to make do with an under-17 World Cup runner-up medal in 2017, and could only watch from the bench as future team-mate Phil Foden scored a brace in the final. Last year, Garcia was the only 18-year-old in Spain’s under-21 squad.

His 2017 move to Manchester was a shocking one for Barça’s suits, especially considering Puyol’s involvement. With it, Garcia joined the likes of Cesc Fabregas, Gerard Pique, Hector Bellerin, Andre Onana and Mauro Icardi in leaving La Masia for foreign climes as a teenager.

Having trained at one of the most advanced academies in the world, working under Pep Guardiola was a logical next step for Garcia. He has starred for and captained Manchester City’s development squads, made a smattering of senior appearances in the latter stages of the EFL Cup in 2019, and has made six appearances in the Premier League so far this season.

With a CV that impressive, Garcia seems destined for success. Manchester City’s absence of fit senior centre-backs means first-team minutes should be imminent. Guardiola has seemed reticent to blood some of City’s other young prospects, but may now have no choice but to trust youth at the back – Aymeric Laporte and John Stones have struggled with injuries, while Vincent Kompany and Eliaquim Mangala (loan) left during the summer.

Leaving the comfort of his hometown club aged 16 to go abroad speaks to Garcia’s bold mentality. Kyle Walker even picked the teenager out as the most likely of City's squad to become a Premier League manager in the future.

He’s got some way to go before taking charge of a Premier League game from the sidelines, but it feels like he’s about to do just that on the pitch. He may be doing it for some time.

Unsurprisingly for a La Masia graduate signed for Guardiola’s City, Garcia is very comfortable in possession. In his competitive City debut, away against Leicester in the League Cup, the Catalan managed a typically high pass accuracy of 91%.

Garcia’s maturity is not in question, and he boasts the calmness and positional intelligence of a player far beyond his years. To master the cerebral elements of the game at such a young age, particularly in a position of responsibility, speaks volumes. After his young stopper impressed against Borussia Dortmund and Liverpool in pre-season, Guardiola gushed that Garcia “is 17 or 18 and played like he is 24 or 25”.

He also reportedly lives at City’s training ground and speaks fluent English, underlining his commitment to performing in every facet of the game.

Garcia is 6ft tall, which means he's not tremendously imposing. He’s not remarkably quick either, which might prove a problem when playing as part of a defensive line as advanced as Manchester City’s.

At 19, and with little senior experience despite his unavoidable talent, Garcia will inevitably make mistakes if he is continued to be used in big games.

“He's so smart, so intelligent. His physicality is not so, so strong, but he resolves the situation by thinking. I like to work with smart people, intelligent people. He is one of them. I can count on him. He has shown me an incredible personality.”

Garcia, ranked by Goal.com as the 15th best teenager in the world, forced Puyol into a career change. Barcelona officials and supporters were so unhappy with their former captain’s involvement in the player's transfer away from the Camp Nou that it made Puyol decide to give up the agency business in favour of spending more time in a less divisive role as an ambassador for UEFA and La Liga.