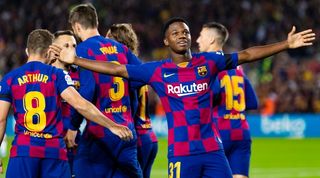 It’s difficult to fathom that not too long ago – only a couple of months ago, in fact – Ansumane Fati was staring at the possibility of a premature Barcelona exit. At a time when La Masia’s brightest stars – and most popular, too – were leaving the club in pursuit of first-team opportunities abroad, there was a genuine fear around the Camp Nou that Fati would follow suit. But as the likes of Manchester City and United swirled, the Catalans bit the bullet, handing the youngster a three-year contract extension with an option for two more – plus a €100 million release clause and the promise of a spot in their B team.

To their credit, the Blaugrana have largely delivered on that final promise, only in a way that few – including the player himself – would have initially foreseen.

Born in Guinea-Bissau, Fati spent his childhood roaming the streets of Bissau, the west African nation's capital, kicking a makeshift ball made up of his rolled up socks. His talent was on show from an early age, though, and Fati was enrolled in Sevilla’s academy aged eight at the behest of academy head Pablo Blanco.

However, two years later, in spite of interest from Real Madrid, Ansu arrived at La Masia. There, he struck up a devastating partnership with Japanese youngster Takefusa Kubo for the club’s under-12s, and they scored 130 goals in their first season. Fati was forced to sit out of the 2014/15 and 2015/16 seasons as a result of Barça's ban on registering foreign players, plus an injury to his tibula and fibula, but returned in 2016/17. He represented their Juvenil-B side before being promoted into the Juvenil-A team last season.

It was here where Fati started making headlines. Despite starting his career as a striker, the attacker morphed into a left-winger to improve his dribbling. Nevertheless, the African starlet proved to be equally as lethal on the wing and top-scored in the under-19s league last term.

After impressing in Barcelona’s pre-season friendlies, Fati was fast-tracked into the first team after injuries to Lionel Messi, Luis Suarez and Ousmane Dembele. And at 16 years, 11 months and 25 days, he became Barça’s second-youngest debutant with a 15-minute cameo.

His remarkable rise was completed before the international break with a crucial goal to help the reigning La Liga champions to a hard-earned 2-2 draw at Osasuna.

And he didn't stop there: on his first start at the Camp Nou against Valencia this weekend, Fati scored within two minutes and set up a second goal just five minutes later, as Barça ran out 5-2 winners.

Standing at 5ft 10in, Fati boasts a powerful frame and brings a physical approach to the game which is often lacking among a technically gifted Barcelona side. Nevertheless, despite his robust physique, the La Masia graduate possesses outstanding dribbling skills which, when combined with his speed, makes him incredibly difficult to stop in one-on-one situations.

Simply, 56 goals in 29 games last season prove how lethal he is in front of goal. The youngster has shown that he has incredible vision and even an ability to control play from midfield. As his goal against Osasuna proved, Fati has the ability to be a threat in the air too.

However, it is Ansu’s versatility and natural talent that has made him a class above his counterparts. "His quality is that he can play in all of the attacking positions,” Albert Puig, La Masia’s former technical director, said. “He can play at 9, 11, 7, 10. He's very versatile. It makes a difference. He's fast. He's got a great imagination. He's got this natural talent… It's very important – this kind of player who plays so freely on the streets for hours and hours. It was the same with Messi as a kid, although Messi is obviously different in other aspects. Added to this his natural talent helps to make the player he has become.”

If there was anything Fati could be criticised for, it’s his decision-making.

The 16-year-old has previously been criticised for his perceived selfishness. To some, the youngster would prefer to go for goal himself at the expense of passing the ball to a team-mate and creating a goalscoring opportunity instead.

Given his age, however, the Guinea-Bissaun still has a lot to learn and one would reasonably expect that his decision-making will improve significantly with time. Messi & Co. won't let him get away with it.

“He’s pure anarchy when he plays, and you need to give these kinds of talents liberty, not hide them out wide – they need to do what’s natural to them. He’s the jewel of La Masia.”

In more ways than one, Fati has Victor Valdes to thank for his speedy ascent.

Barca team-mate warns: We must be patient with Ansu Fati – despite flying start

Not only has the former Barça goalkeeper overseen the youngster’s development over the last few months, the 37-year-old had to buy Fati a new pair of boots on a recent trip to Russia.

"I told him to bring me his boots and they were a complete disaster, they were causing him pain," Valdes said. "Nobody had thought it could be the boots, but I did. We went to buy some new ones."

With Lionel Messi, Luis Suarez and Ousmane Dembele set to remain on the sidelines following the international break, and with Rafinha loaned out to Celta Vigo, there's a good chance that we will see much more of Fati in the weeks to come.

Going forward, however, Ernesto Valverde must be prudent as he looks to develop the precocious talent. As history suggests, such a job isn’t so simple. Of Barcelona’s 10 youngest debutants, the vast majority – see Bojan Krkic, Gerard Deulofeu, Marc Muniesa, Adama Traore – have all stalled despite showing early promise. Messi, as ever, is the notable exception.

If Barcelona are to get the best out of Fati, they will have to ensure that they manage expectations carefully while giving him opportunities to fulfil his undoubted potential.