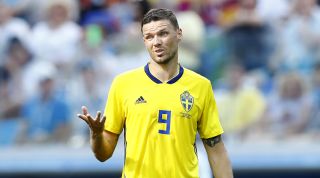 The striker was more than hospitable to his new lodger, as he stocked the fridge with free food and drink before he departed for Russia. He did, however, want Bergkvist to do a few chores for him.

The 31-year-old hitman, who plays his club football for Al-Ain, pinned a list on his fridge requesting that Bergkvist take care of his flowers and tune in for Sweden's opener against South Korea.

Bergkvist obliged and watched the match alongside some friends as Berg missed a glorious chance to get Sweden's first 2018 World Cup goal in the 20th minute. Fortunately, the player's blushes were spared as Andreas Granqvist converted from the spot to secure a 1-0 win.

Bergkvist told Expressen: "A friend tagged me in the ad on Facebook and it looked like a funny and unique opportunity.

Senegal and Japan fans tidy up after their World Cup matches

Moscow's beer supply is running low during the World Cup​

"I filled in an application revealing why I wanted to house-sit the apartment and the rest is history.

"The list of tasks we got included taking care of the flowers, exploring the city, having fun and cheering for Sweden during the games. And we’ve ticked them all. So mission accomplished. Marcus will be very pleased."

Berg even provided Bergkvist with a full Sweden kit to wear, too. Snazzy.