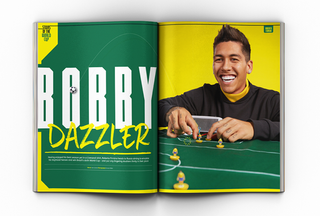 Coutinho became a firm fans’ favourite during his five years at Anfield after arriving from Inter Milan in 2013, going on to score 41 goals in 152 Premier League games and assisting 35 more for his team-mates.

The 25-year-old joined the Catalan giants in January for a fee that could rise to £142 million, making him the third-most expensive player on the planet behind compatriot Neymar and Kylian Mbappe.

Coutinho enjoyed a smooth transition to La Liga, finishing the 2017/18 campaign with eight Barcelona goals – including a hat-trick against Levante – and five assists.

The string-puller will renew acquaintances with former Liverpool companion Firmino in Russia as Brazil bid to win a sixth World Cup, and the latter is looking forward to teaming up with his friend once again.

Speaking exclusively in the July 2018 issue of FourFourTwo magazine, Firmino says: “Everybody knows that Coutinho is a great footballer – here in England they call him ‘The Magician’.

“He made his decision to join Barcelona, but every time we play for the Seleção we have a chat and maintain that friendship. He's an exceptional guy – one of the best friends football has given me.”

After a sticky start, Brazil romped through their qualifying group after Tite took over as coach in June 2016, winning nine consecutive games en route to topping the CONMEBOL table by 10 points.

Brazil boast just one defeat and 17 victories in their last 21 internationals, and Firmino is hopeful that they will be able to maintain that winning momentum and emerge victorious in Moscow.

“I believe Brazil is enjoying a good uprising since Tite took over – everyone is playing good football,” says Firmino, who scored the late second goal in Brazil's 2-0 win over Croatia at Anfield last Sunday.

“We had some great results during the qualification campaign, so I hope we’ll be able to keep that momentum at the World Cup. I think it’s important for the fans to see us playing attacking football.”

Read the full interview with Roberto Firmino in the July 2018 issue of FourFourTwo magazine. A ‘Stars of the 2018 World Cup’ special, we also chat to world champion Mats Hummels, Brazil boss Tite, South Korea’s Son Heung-min, England midfielder Jesse Lingard and Panama legend Roman Torres. We also profile some of the young stars hoping to make their mark at Russia 2018, hear how a hotel fire helped Joan Capdevila inspire Spain to 2010 World Cup glory, celebrate the story of Jamaica’s Reggae Boyz at France 98, and reveal the World’s Cup biggest villains. Plus, Nigel de Jong gives us his take on ‘that’ tackle against Xabi Alonso in One-on-One. Order your copy today, and then become a subscriber!