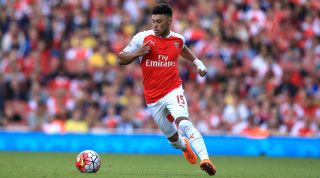 In games against the bigger clubs, West Brom are arguably the most predictable team tactically. Tony Pulis will instruct his players to sit in congested, narrow rows to form a deep-lying defensive shield in front of the penalty area. This structure is used frequently by the Baggies, but against a team like Arsenal – who look to recycle possession and dominate territorially – they will be camped within their own half for long stretches of the match.

Against Manchester United, 28% of their passes were classed as long as they held 37% possession and managed just four shots on goal. This is consistent with their defensive style in 2015/16 - West Brom have the lowest average possession (43.5%) and the second worst pass success rate (72.5%).

They will play with similar defensive grit against Arsenal, who welcome back Alex Oxlade-Chamberlain to patch up their weak spot on the right flank (although attacking well, Joel Campbell’s defensive work led to vulnerabilities against Bayern and Spurs). Arsenal can often be accused of relentlessly searching for the intricate final ball, rather than varying their approach; Manchester United approached this fixture with a similar mentality, and relied upon a moment of brilliance from Jesse Lingard to break the deadlock.

Oxlade-Chamberlain’s return is timely. His pace, directness, and propensity to hug the touchline should provide Arsenal with the width they need to stretch apart the West Brom shell. Arsenal are one of the most narrow teams in the Premier League, and while historically looking relentlessly for the infield pass, Arsene Wenger has added greater emphasis on traditional wing-play this season.

It is difficult to see West Brom posing a goal threat if Pulis picks the same XI as he did at Old Trafford, where a lack of guile and trickery in central midfield prevented them from counter-attacking effectively.

If Saido Berahino is returned to the starting line-up in central attacking midfield, however, then Arsenal’s Francis Coquelin must stick tight to the English forward. Coquelin shields the Arsenal back four tremendously (3.4 tackles, 2.8 interceptions per match) and his role on Saturday will be simple. If Berahino plays, then it will be Coquelin’s job to track his movement and stamp out any signs of the counter.