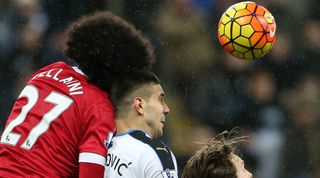 If he's on the pitch, the eye is drawn to Marouane Fellaini. He is always one of the most important players on the pitch, either because his gigantic frame takes centre stage as long hoofs are aimed at his afro, or because his chaotic midfield positional play makes him conspicuously absent – influencing the game precisely by not influencing it. Both of these factors could play a big part against Liverpool, whose high pressing game – coupled with the return of Jordan Henderson and James Milner – could make Fellaini a vital component of Manchester United and Liverpool’s attacks.

A contributing factor in the chaos of United’s recent 3-3 draw with Newcastle was the away side’s tepid pressing; though territorially dominant, United do not attack the ball when out of possession. This low tempo, conservative style will encourage Liverpool to grab hold of central midfield – a vital area in what should be a congested and at times frantic encounter.

Henderson and Milner average 100 passes between them per game, and their remarkable energy levels allow them to press extremely aggressively (Henderson made seven interceptions against Arsenal). They will probably bamboozle Fellaini (who is increasingly struggling with the pace of top level football - he committed four fouls versus Newcastle) as Georginio Wijnaldum did in midweek.

That Roberto Firmino is currently being deployed as a false nine only adds to Louis van Gaal’s problems. He will drop into midfield to help build in this key central zone of the pitch where Fellaini is largely absent.

However, Fellaini could also be United’s most potent weapon. In the midweek match between Arsenal and Liverpool, the home side’s gegenpressing forced Arsene Wenger’s defenders to launch long balls up to towards Olivier Giroud – an unusual tactic for Arsenal but one that was necessary under the intensity of the Liverpool challenge. Arsenal recorded 71.1% pass accuracy, down from a season average of 85%.

Man United will be forced into a similar action this weekend, and thus Fellaini’s aerial prowess will come in handy; they are using the route one option with increasing frequency in recent weeks as Van Gaal tries to answer critics with some higher tempo football. One way or another, it should be Fellaini who decides the outcome.