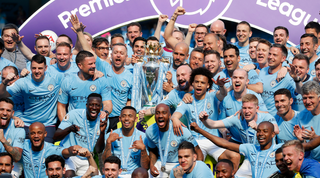 It’s a time to take refuge in fly-on-the-wall sports documentaries. In the absence of the real thing, which we have to presume will be gone for some time, Netflix, Amazon Prime and the other streaming services are presumably doing a roaring trade.

We’re in luck in that regard, because never have those programs been in richer supply and never have they had such variety. NFL Films’ All or Nothing and Hard Knocks have been staples for some time now, but their formats have also been expanded to other sports, such as rugby union (the All Blacks), European football (Manchester City, the Brazilian national team) and Formula One.

Just within the last week, the second series of Drive to Survive has launched. So too has The Test, an account of the Australian cricket team’s recovery from the 2018 ball-tampering scandal.

I have no interest whatsoever in motor racing, nor really in cricket. And yet, as is always the way with engaging box sets, both were consumed within days and in great, long binges while day turned to dusk. The outbreak of Coronavirus has given us all more time at home, but that would have been the case regardless.

What will happen to the end of the Premier League season? Here are the options to deal with the coronavirus suspension

Both are excellent. Whether they scratch the itch for proper enthusiasts is another matter, but they certainly provide fine and compelling drama.

But they also help make an interesting point. Over time and now with so many examples to compare, what has become clear is that the sport itself is not important to these series’ appeal. Instead, it’s the access, the people, and the storytelling arcs.

The actual mechanics of American football, for instance, are secondary. Whether a club or organisation is succeeding or not is also neither here nor there, with the only true currency being the human responses to those fluctuations. That is the real selling point.

And that’s proven because in almost every case, the viewer already knows the outcome of what they're watching.

Celebrity isn’t important, either. Looking back over the many series of Hard Knocks, it’s actually interesting to remember that the best storylines concerned players who were on the margins of a team and who weren’t – or who would never become – household names.

The value is in the people. The viewer has some interest in peaking behind the scenes and watching dynamics which are usually kept behind lock and key, but that novelty can only last for so long. Unfortunately, when football takes the stage it behaves as if that isn't true.

On reflection, the reason why documentaries like An Impossible Job and Orient: Club for a Fiver endure is partly because what followed has been so underwhelming. A common problem, of course, is that this is a different age of the game and teams and players are used to operating behind closed doors. They're more protective of their processes and their reputations. Because of that, it has become very easy to get the ratios wrong, with the temptation being to create more of an advert than actual entertainment.

NOW READ Making ‘An Impossible Job’: FourFourTwo's inside story from the men involved

The Leeds United series is a good example of that, so too the West Ham equivalent. And Juventus before that. Those are programmes which exists to portray the respective organisations in a particular way and come across like covert branding exercises; they suffer terribly as a result.

As did the Manchester City installment of the All or Nothing series, which was bland and dull and overly stage-managed, despite the experience of the production team behind it. Ultimately, it inadvertently spoke to football’s resistance and described how it guards its privacy. It fed its audience on over-edited scraps.

And that's an important distinction. The reason a docu-drama like Sunderland ‘Til I Die was received so favourably, was because it offered a contrast to that normal standard. Things went wrong and the spectacle was more real as a result. It conveyed the struggle of that situation through the stress placed on chief executive Martin Bain and, in the final months, on Chris Coleman. It showed the humanity. It was possible to feel the struggle and emphathise with those having to bear it.

The Four Year Plan belongs in the same category, too. Even more so, maybe, given the ridiculousness of the participants and the absurdity of that situation at QPR.

The commonality between the two is that they felt fair. They were accurate and honest. When the events don't reflect favourably on owners, managers or players - when it isn't obviously a PR exercise - the audience can credibly believe that they’re watching something real. It’s a pretence of sorts, because detail will always be left out and everyone understands why that has to be, but that heightened authenticity is where the emotional investment comes from.

That's what captivates an audience. That's what draws them towards someone like Jonny Williams. It was that he wasn't perfect.

Subjects need to be vulnerable. They need to make mistakes. Sometimes they need to fight. Verbally and physically. If we accept that the characters are the most important element within these series, that they are the commodity which gives them their heart and soul, then it goes without saying that they must be believable.

And yet in the Football World which the game tries to present they rarely are. They're skin-deep. They're holograms. They behave as if a press officer is just out of shot. Everyone always has their best side to camera and every conversation or interview seems to reveal only what the subjects want you to hear. Or what it benefits them for you to know.

But that's not how sport works. It's a competitive environment full of ego and vulnerability, highs and lows, and there isn't a professional team in the world that doesn't make mistakes or suffer through its fractious moments.

Until football recognises that this illusion can't be pedalled – until it learns that showing flaws can actually be a strength – it will remain the outlier within this genre, and the unwatchable part of a fascinating new trend.