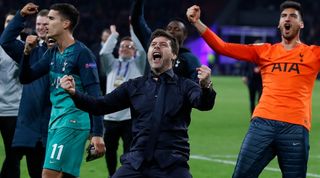 In five years as manager, Mauricio Pochettino has taken Tottenham Hotspur from seventh in the Premier League to the final of the Champions League.

From a club that were once synonymous with mediocrity, they have become a staple of Europe’s elite competition.

Poch has become the longest serving manager at the club in over 30 years, and has managed to oversee this transformation without spending big – with finances instead being invested in a state-of-the-art new stadium.

So how has he done it? What drives him? And what happens when he leaves?

In this episode, we discuss all that – as well as Thomas Gravesen, and the weirdest football transfers of all time.

Conor Pope talks to Hunter Godson, author of the FourFourTwo’s latest cover feature on Spurs, and Nathan Clark, freelance journalist and contributor to the Spurs podcast The Extra Inch.

HUNTER GODSON: What's wrong with Tottenham? Here's why fans are so frustrated

Find out what's in the new FourFourTwo, buy the issue here to get it delivered to your door, and subscribe to get five issues for just £5