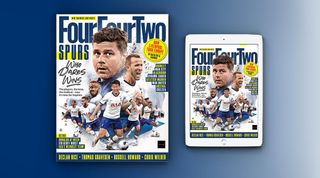 Football is a lot of different things to a lot of different people. For most of us it’s about placing far too much hope, faith and adulation in the boots of young men and women, and then being disappointed when we don’t always get what we want them to do. Or completely euphoric when we do. For those playing, it’s a dream that sometimes becomes a nightmare. For others involved in the game, it’s about money and power, or glory and nostalgia.

This month we deliver pieces on all of those themes. Tottenham and Liverpool went all the way to the Champions League final in June; we revisit how the Reds won it, and consider how Spurs must go that little bit further to secure another major trophy. As Europe’s big kickabout gets underway once again, we also preview who’s most likely to win big this time.

Elsewhere, the issue is packed full of interviews with footballers old and new, from Fabinho, Lucas Moura and Declan Rice to Martin Keown, Ray Clemence and Sir Geoff Hurst. It’s not all glory, though, as we look back at Ronaldo’s doomed Inter days in the late-90s and discover what it’s like for Notts County supporters and players to be out of the Football League for the first time in their history.

Fans, players and a politician tell us whether the best is yet to come, on and off the pitch: Paul Hawksbee assesses his beloved side, Lucas Moura relives his Ajax treble and Eric Dier gets his chat on with David Lammy.

The story of the Brazilian great’s record-breaking move to Serie A. He joined for a world-record fee in 1997 as the world’s greatest striker – but then it all went wrong.

How the Reds ruled Europe

The inside story of Liverpool’s emotional Champions League triumph, told by Kenny Dalglish, Fabinho and more.

The former executive director of Dinamo Zagreb, Zdravko Mamic is on the run from Croatian authorities after being found guilty of transfer fraud – a scandal which led to Luka Modric and Dejan Lovren appearing in court. Did we mention that he's also escaped an attempt on his life? FFT tracked him down in Bosnia...

Declan Rice was let go by Chelsea, nearly let go by West Ham and felt he didn't belong in the Premier League. He tells FFT how he overcame self-doubt to become an England international.

Barcelona, Real Madrid, Bayern Munich, PSG and Manchester City are all aiming to knock the Reds off their perch – and they’re just the obvious contenders. Plus: Kieran Trippier chats early life at Atletico Madrid...

They have seen promises of the Premier League and their club flirt with extinction, but for Notts County supporters a new season always brings new hope – even if it’s their first-ever campaign in non-league.

A rock producer owner, a Super Bowl winner, the best multi-event athlete of his generation and football’s most infamous shirt – it’s the USA’s maddest, baddest team.

The former Everton and Real Madrid star talks Mike Tyson, the Galacticos and much more...

Why not take advantage of our brilliant subscribers' offer? Get 5 issues of the world's greatest football magazine for £5 – the game's greatest stories and finest journalism direct to your door for less than a pint in London. Cheers!