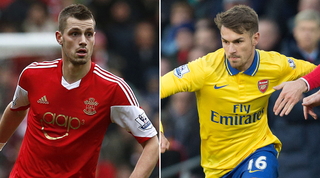 The true test of Arsenal’s title winning credentials. (Which is what every one of their matches will be billed as until they lose. Then it’ll be: A test of how they recover from blowing their title chances).

They’ll never do it. Don’t have the heart for a fight, Jeff. All a bit too tippy-tappy. So says (insert name of open-shirted pundit here), who has written off Arsenal’s chances of winning the league this year based on… well, being Arsenal.

Our response to open-shirted pundits everywhere is simple: Arsenal aren’t being very Arsenal this year. Don’t discount them.

The defence marshalled by Per Mertesacker has been miserly so far, conceding only 19 goals, the fewest in the Premier League. At the other end, they’ve scored more headed goals than any other side in the league (yes, we had to double-check this as we didn’t believe it either).

On the road, they beat West Ham and Newcastle despite playing poorly. All very un-Arsenal. If they continue to display these non-Gunnerish traits, who is to say they can’t win the title? Open shirted pundits, most probably, but they may turn out to be wrong.

While things seems to be ticking along nicely for Arsene Wenger’s side, Southampton appear to be falling apart. All manner of misfortune (some self-inflicted) has befallen the club in the past couple of weeks.

Just a couple of days after the resignation of club chairman Nicola Cortese, Southampton let a two-goal lead slip away to Sunderland.

No sooner had Mauricio Pochettino pledged his future to the Saints, than Dani Osvaldo was windmilling in the direction of Jose Fonte, a bout of ‘handbags’ (the correct football term, we think you’ll find) that earned the club’s record signing a two-week ban. Not the ideal preparation for a game, especially since the last time Southampton beat Arsenal was in November 2002.

It’s not all doom, gloom and despair, though. The Saints may not have picked up as many points as they would have liked in the last couple of months – since they last played Arsenal in fact – but that’s because they’ve had a tough run of games, playing: Chelsea (twice), Man City, Tottenham, Everton and Newcastle.

The good news is that four of their next five games are against Fulham, Stoke, Hull and West Ham. The bad news is that the first one is against the Gunners. Southampton’s misery looks set to continue for a few more days yet.

Victor Wanyama is back in training for Southampton but will still miss this game, with assistant manager Jesus Perez saying "he needs more specific training to improve his physical fitness". As previously mentioned, Lovren and Ramirez are out with ankle injuries. And Osvaldo misses the game for trying to injure someone else.

For Arsenal, Mikel Arteta, Thomas Vermaelen and Aaron Ramsey could return from their various ailments.

The French forward will be hopeful of adding to his tally of nine Premier League goals as he comes up against a Southampton defence minus the aforementioned Lovren. In the Croatian’s absence, Pochettino will be relying on Maya Yoshida or Jos Hooiveld, neither of whom have been entirely convincing this season.

Against Aston Villa, Giroud ably received the ball upfield before playing it out wide to the right, helping maintain possession. He also popped up with a goal. Just as he did against Newcastle, notching the winner in a game where the Gunners struggled for any real fluidity.

And less an indication of performance, and more an amusing aside, his goal came in the same match as a shot so wayward its destination failed to register on Stats Zone. Two shots, impressive for different reasons.

As we’ve touched on, Mauricio Pochettino has pledged his immediate future to Southampton. Whether he stays beyond the summer, though, depends largely on the player ins and outs. The only certainty is uncertainty. As for Wenger, he’ll still be at Arsenal long after we’re all gone. He’s there FOR EVEEEEER!

Another routine victory for Arsenal (which is immediately waved away by the ‘experts’). 0-2.