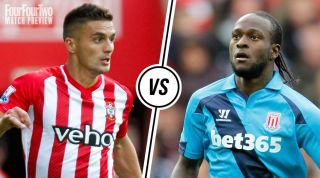 Going into the international break, many wonderers were wondering if Southampton's bubble was about to burst.

They had just been beaten at White Hart Lane, 1-0 and with a whimper. Was this the start of an inevitable slide for a club sat in third but punching well above its weight, they asked? Would the fall gather pace against a team, Sunderland, who had enjoyed notable success over the Saints in recent times? That's what some wondered.

But then they scored 8 (EIGHT) and the supposedly inevitable slide was put on hold. Oddly, for the first 20 minutes, Sunderland could argue they'd been the better team. But then Santiago Vergini lashed one home, past his own goalkeeper, into the wrong goal, and the encounter quickly evolved into a mismatch and then a farce.

The Saints simply picked up where they had left off in the games that had carried them up to within sniffing distance of the top. Graziano Pelle added two more, to take his season's tally to six in eight games, then bent over and smacked his own backside by declaring: "Not everything went how I wanted it to today, I will improve."

But as illustrated against Sunderland, it's clearly not just about Pelle. Ronald Koeman has assembled a team that now threatens goals from all over the pitch.

Jack Cork (2), Victor Wanyama (2) and Morgan Schneiderlin (3) have already scored more than they did last season, while full-backs Nathaniel Clyne and Ryan Bertrand have found the time to chip in with their first Premier League goals while also protecting the Premier League's tightest defence (5).

As we now know, Sunderland clearly aren't the sternest test of a team's mettle, but Koeman's team will be hard to beat for anyone and may take some dislodging from those top-four places.

We'll know more about their ambitions after the visit of Stoke, who climbed up to 10th place on the back of a win over Swansea that featured two penalties, both hotly contested and causing all sorts of a stink.

Interestingly, kind of, Stoke's previous away game saw them lose 3-1 at Sunderland. Simple schoolyard logic would therefore suggest they should lose on Saturday by 10 goals to one, but they probably won't.

So as not to spoil the drama of the scoreline prediction at the bottom of the page, let's just agree that Stoke, with a lengthy injury list shortening, should pose a more robust and resolute challenge than Sunderland did.

The hosts have a comparatively clean bill of health, with no fresh injuries following last weekend's romp – James Ward-Prowse and Jay Rodriguez remain out and are unlikely to reappear before late-November/early-December. Stoke's injury list is significantly longer, but Marko Arnautovic, Phil Bardsley and Robert Huth are all edging closer to a return. Victor Moses should be fit, despite being thrown 'very roughly' to the ground against Swansea. However, Glenn Whelan is out for four to six weeks with a leg fracture.

There's an argument that this may unexpectedly be Stoke's Geoff Cameron, the defensive midfielder who arrived as a substitute against Swansea and turned the tide in the Potters' favour with a dogged, disciplined performance. His snarl was much needed and will be required again if Stoke are to survive an onslaught at St Mary's, particularly with Tadic prompting, probing and generally being a pest in front of him. A midfielder of rare menace, the Serb's 4 assists and goal against Sunderland on top of an impressive eight-game start to this season make selecting anyone else for key man a disingenuous waste of time.

Having made a mockery of the supposed curse of the Manager of the Month award, and indeed of Gus Poyet's credentials as a manager, Koeman announced himself mildly irked by Southampton's 8-0 win over Sunderland. "It wasn't perfect," he harrumphed. "I wasn't happy with the first 20 minutes." Expect a better effort on Saturday, then, or the teacups to go crashing.

Mark Hughes was too busy defending Moses, berating Garry Monk and pondering refereeing agendas against his team and Ryan Shawcross in particular to celebrate a much needed three points.

“For whatever reason, Ryan Shawcross has been highlighted in terms of how badly he does pulling in the box, more than anyone else – which is complete nonsense, to be completely honest," said Hughes, perhaps referring to the statistic that Shawcross has conceded more penalties in the Premier League since the 2008/09 season than any other player, with seven now to his name.

“Everybody in the Premier League is holding people at corners. The fact that it’s been highlighted is, maybe, in the back of the referee’s mind." And, after last Sunday, in the foreground of everybody's now.