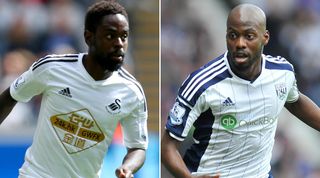 "OK, class. Here's today's test. 'The season is still young enough for impressions to be based less on empirical evidence than theoretical extrapolation: Discuss in relation to West Bromwich Albion and Swansea City.' Care to start us off, Perkins?"

"Well, sir, Swansea seem to be doing well: they've won all three of their games, the latter two without conceding, and the first at Manchester United, whom the history books say were once quite the force."

"They were indeed, Perkins, a perfect synthesis of brawn and brain, the like of which you'll never be. Pilkington, what of the Throstles?"

"Sorry, sir. Erm, they've basically drawn all three games, except you're not allowed to draw in the League Cup so they eventually beat Oxford on penalties."

"Oxford? Not a place you'll be needing to look up, Pilkington, judging by your results so far. Which is an example of…?"

"Correct! Maybe you've a chance after all. So, what might we extrapolate from each teams' results so far, Wilson?"

"No, sir. And we all know Swansea won't win the league, because nobody will unless they spend hundreds of millions of pounds. But will they be good enough to beat West Brom? OK, McMullan, you seem keen: tell us."

"Might depend on shooting accuracy, sir. Against both Man United and Burnley, Swansea let the opposition have more shots, but were deadlier with their own efforts. That's empirical evidence, sir."

"Certainly is. Any more of it?"

"Loads, sir. West Brom had 58.2% possession at home to Sunderland but away at Southampton, who are more of a Swansea-style passing team, they only had 42.3%. That said, at Swansea last week Burnley had more passes in the final third than their hosts – 55 completed out of 85 compared to the Clarets' 86/141 – so maybe they can put that back-line under pressure, and Swansea can't keep winning with fewer shots than the opposition."

"Good research, boy. What's that you've got there?"

"Stats Zone, sir. It presents empirical evidence to allow you to extrapolate what might happen next."

"Good lad. Let me have a look at that while you nip down the bookies for me and put a tenner on the Baggies to win. Class dismissed..."

The League Cup gave both managers a chance to rummage around the squad: Swans made 10 changes, West Brom made seven. Bafetimbi Gomis scored the Swans' winner on his full debut, but Wilfried Bony will expect to regain his place atop Garry Monk's Christmas tree. However, Monk may retain the services of the other new recruits - £8 million Argentina centre-back Federico Fernandez and Spurs loanee Tom Carroll.

The Baggies picked the same XI in their two previous league games; the League Cup win gave full debuts to ageing utility back Chris Baird, Aussie left-back Jason Davidson and strike hope Brown Ideye, in rapidly ascending order of likelihood to be picked at Swansea. Centre-back Christian Gamboa also came on as sub, which demonstrates how far back he is in the queue.

Returning Icelander Gylfi Sigurdsson grabbed the winner and the headlines at Manchester United, but was more subdued last week in the home win over Burnley: he only completed 8 passes in the final third, not the return Swans would want from an advanced midfielder (for comparison, the Clarets' Dean Marney completed 18). And out to thwart him will be one of the Premier League's busiest bodies: at Southampton, Youssouf Mulumbu he topped the list for ball recoveries (an eye-popping 19), interceptions (6) and tackles (9, all won).

Far from universally welcomed upon his appointment, Alan Irvine is already under pressure from some fans – the Baggies were booed at full-time after that scrambled League Cup win. He's yet to lose a Premier League game, but then again he's never won either of his two so far.

Despite being 21 years Irvine's junior, Monk is a relative veteran of 16 Premier League fixtures (W7 D3 L6), and comfortable enough to acknowledge his side's shortcomings, saying:

"Of course we'd love to score four or five goals every single game but it doesn't always happen so it's about doing the right job."

You'd expect Swansea to win this, and that wouldn't be a surprise – but then, if Brown Ideye fires, Baggies might just repeat their vital 2-1 win at the Liberty in March.