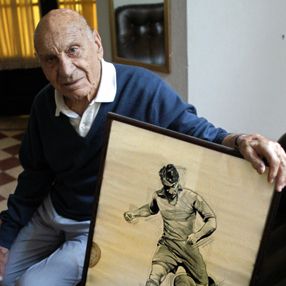 Francisco Varallo, the last remaining survivor of the first World Cup final in 1930, spoke to FourFourTwo in May 2010 shortly before he passed away.

I started as a defender, but I scored so often my uncle suggested I should play up front.
I was 16. As soon as I started playing as a forward I knew I’d found my position. I liked the idea of scoring the winner, of seeing my name in the papers. I still like to be remembered.

Eighty years after the 1930 World Cup Final, I still remember much more than I would want to!
If there’s a game I don’t want to recall, it’s this one against the Uruguayans – and it keeps coming to mind! We failed. We were winning 2-1 after half-time then during the second half we fainted.

My team-mates were afraid of winning that game.
It was a very hostile scenario and the Uruguayans threatened us. I didn’t care, but I couldn’t recognise most of my team-mates. If a Uruguayan fell on the floor, Luis Monti would approach to offer him a hand – he was scared! A cousin later told me that he’d met the Uruguayans before the game, and they’d said: ìPancho Varallo? He’s the first one we're going to take outî. Sadly, he only told me this after the game.

I was carrying a knee injury during the final.
But before the game, my team-mates tested me in a henhouse that was next to our hotel. My knee responded well, so they made me play. I was eager to play, even if I shouldn’t have. In the second half, I grabbed a loose ball and hit it with all my strength.

‘Little Cannon’ they called me.
The ball deflected off the crossbar and I injured my knee very badly. I kept playing, only because there were no substitutions at that time. It’s the same knee that made me retire at 29, and the same knee that aches these days!

The older team-mates decided everything.
The manager was not important at all. I was the youngest in the team at 20. In that side, I should have been a substitute because Alejandro Scopelli was part of the First XI, but I played the first game and played well. So I remained as right insider, number eight. Attack lines had five players then, you know. On the pitch I had a very good understanding with Guillermo Stabile, who scored a lot of goals.

I’m responsible for installing the professional era in Argentina.
I used to play for Gimnasia until Boca Juniors called my dad to see if I wanted to sign for them. They offered me a lot of money, 10,000 pesos. It was enough to buy a house and save 7,000. My dad had never seen $100 bills before! The Gimnasia fans threw stones at my house, but I couldn’t say no.

I loved playing for Boca.
I played alongside Roberto Cherro, the best partner I’ve ever had on the pitch. We scored a lot of goals together. He always tried to give me the ball, rather than passing it to Delfin Benitez Caceres, the  Paraguayan striker! From my 181 goals at Boca, I owe 150 of them to Cherro.

I just couldn’t score with my head.
I got over 200 career goals, but very few were headers. I just wasn’t very good at them. Mind you, with that heavy ball we used to play with, it was probably a good thing! I was dangerous waiting outside the area to take long-distance shots rather than waiting for crosses. When the pitch was wet, team-mates would tell me: ìToday is made for you, Panchoî. It was impossible for goalkeepers.

I toured the Americas for six months with Velez Sarsfield.
It was great. Velez took me and the great Bernabe Ferreyra for a tour. We travelled on a ship, stopping in Chile, Peru, Panama, Cuba, Mexico and New York. We’d train on the ship, and got so used to it that when we were on the ground, it seemed like everything around was still moving!

I could have played in the modern era, although I think football now is harder.
Football is much more difficult today. I watch it on TV. I follow Boca and Gimnasia. The game is interrupted so much, I find it boring. It wasn’t like that at my age – there was freedom to play and the focus was on attacking not defending. I also see bad tackles and fouls I don’t like – defenders grabbing, using their hands all the time. But I enjoy watching goals. I’ve always enjoyed goals!

The best player I ever saw, was Jose Manuel Moreno.
People now say that they’ve seen Maradona, but I’ve seen Moreno, from River’s La M·quina (The Machine), and he comes first. He was amazing, the best player I’ve seen, the one I admired the most.