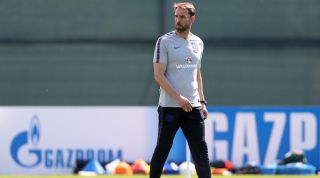 Southgate's England are preparing to face Belgium in their World Cup third-place play-off match on Saturday. But in Harrogate, Yorkshire, there's already plans being discussed to welcome their famous resident home.

According to reports, Harrogate's town hall officials are trying to figure out what would make a fitting return for the 47-year-old who led England to their first World Cup semi-final since 1990.

Additionally - and perhaps even more crucially - a local bus company has offered to provide an open-top double-decker bus should officials sanction a parade. Southgate reportedly lives in a Grade I-listed, 16th-century mansion in the spa town.

The Three Lions squad are not expected to participate in a parade when they return from Russia, so one purely for the ex-Middlesbrough boss could be a sight to treasure.

Belgium, who lost 1-0 in the other semi-final to France, are going to have a bus parade held for them in Brussels on Sunday.