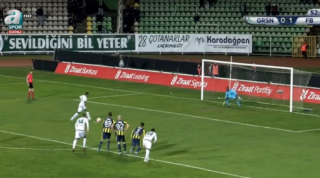 At 1-0 down, hosts Giresunspor were awarded a penalty in the 52nd minute of their Turkish Cup tie against Fenerbahce - only for Dodo to completely fluff his lines.

The Brazilian midfielder plumped for a painstakingly slow run-up before failing to connect with the ball properly. The result? A trickled effort which slowly rolled past the post. It's no wonder he hasn't scored this season.

Carlos Kameni in goal couldn't stop himself from smiling, while one Fenerbahce player even went as far as consoling Dodo. It really was that bad.

Giresunspor did find an equaliser through Jones Carioca in the 73rd minute, but Fenerbahce emerged victorious as Fernandao scored a winner - from the penalty spot - at the end of added time. That's how it's done.

Brazilian fans turn on their team... by stealing their post-match pizzas