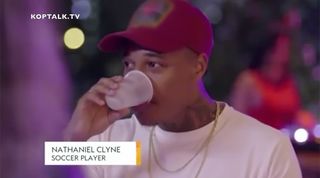 Nathaniel Clyne has been injured for a long, long time and is still at least a month away from returning to the Liverpool squad. Rehabilitation from serious injury necessitates many hours in isolation, of course, and plenty of time with physios and in weight rooms.

Love & Hip Hop: Miami airs on VH1 - FFT never misses it - on which the absent full-back was introduced as "my homeboy, international soccer superstar Nathaniel Clyney". He was brushed aside by one of the show's main characters ('Poochi', of course), though, and appeared to spend only a few seconds on screen.

What Clyne was doing in Miami remains unclear; how he found his way onto a television set is vaguer still.

Clyne can presumably look forward to some red-hot dressing-room #banter upon his return to Melwood. And lots of questions.

A plague of locusts threaten the 2018 World Cup

King of the forwards - Konyaspor welcome Eto'owithGame of Thrones-inspired video