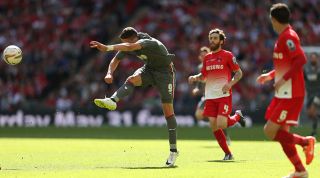 Sometimes you just have to hold your hands up when the opposition scores a screamer – even when it’s a familiar face gleefully mangling his former club’s immediate future.

For Leyton Orient supporters, Alex Revell’s long-range volley for Rotherham in the 2014 League One Play-Off Final began a spiral that would send the O’s spinning out of the league – and almost out of business. Heads were in hands for the next few seasons.

Revell, a lanky striker, had done a decent job for Orient from 2010-11 before his deadline-day move to South Yorkshire. The O’s hardly missed him: they rapidly improved under the inspirational Russell Slade, narrowly missed automatic promotion to the Championship in 2013/14 and then went 2-0 up in the play-off final. But Rotherham pulled one back – also Revell – and then the unthinkable happened.

I’d personally met the striker back in 2009 for a revealing interview about life as a loanee, after Revell joined the then-FourFourTwo-sponsored Swindon Town. Having moved on to Orient he seemed to, ahem... revel in scoring against the Robins, so him eventually haunting us was perhaps inevitable.

But no one saw that Wembley equaliser coming.

In the 60th minute, Revell latched onto a knockdown near the left touchline, thighed it infield, had a brainwave as it bounced and lashed a high right-footed volley into the top-right corner; like a looping tribute to Wembley’s arch.

We couldn’t really blame him for celebrating it; much harder to stomach was the sight of his gaffer, the ever-bumptious Steve Evans, barrelling down the touchline. Rotherham won on penalties. Our recovery has only just begun.

That summer Orient were bought by the Italian trash magnate Francesco Becchetti, whose strategy of acquiring ex-Premier League players might have made some sense in the Championship. In League One it destabilised a previously tight team: Slade left, Orient lurched through countless managers, two divisions and near bankruptcy before a club-saving consortium was founded in 2017 by the ice-cool ice cream guru, Nigel Travis.

Actually, the new regime made such a positive impact – notably this season’s promotion push – that we may eventually view the post-Wembley catastrophe as a necessary rite of passage. But for now, that speculative volley still chills the bones. Cheers, Alex.

THE HANGOVER Coming to terms with Leeds United's play-off heartbreak

QUIZ! Can you name the 30 most recent clubs to win the FA Cup?