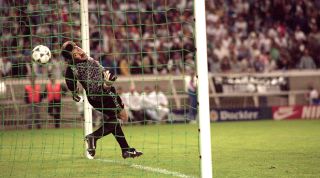 There was a pause. A stunned silence. And then a roar – the kind only Spanish fans make. ‘Aaaaahhhh!!!!’ I looked at my dad and then at my best mate. Neither of them said a word, but both of their faces said it: “What the f*ck just happened?”

A swarm of white shirts rushed towards the Real Zaragoza bench. David Seaman was laying in the back of the net, looking around for a friend. “Don’t worry Dave, you haven’t really been lobbed in the Cup Winners’ Cup final.”

But he had. By a former Tottenham player. From 45 yards out. And that reminds me – you know that terrace chant sung by the other lot in north London for the past 24 years? It’s wrong. Nayim didn’t score from the halfway line, just a bloody long way out.

Moments before the goal, I was imagining what it would be like to watch my first shoot-out live. With the score 1-1 and the match in the last minute of extra-time, penalties loomed.

While thoughts of Seaman’s heroics from the semi-final (he'd saved three spot-kicks against Sampdoria) raced through my mind, Martin Keown’s headed clearance found Nayim lurking around the right-hand touchline. The Spaniard chested the ball down, prompting Zaragoza forwards to run in behind the Arsenal defence.

But Nayim had other ideas. He’d seen Seaman off his line. No one, including the England goalkeeper who was perfectly placed to sweep up, saw what was coming next.

Nayim walloped the ball up to the moon. Seaman was in trouble. Big trouble.

He ran back to his goal line like a great aunt scrambling to catch a family heirloom knocked off its shelf by an unruly toddler. But the big Yorkshireman mistimed his leap and ended up pawing at Nayim’s shot like a helpless puppy, before collapsing into the back of the net with the ball. Arsenal’s moustachioed sentry just lay there in a crumpled heap, with the look of a man who’d just been pickpocketed in broad daylight.

I don’t remember if Arsenal even had time to restart the game, but it was over. My first cup final had ended in heartbreaking defeat.

As a 12-year-old boy sitting in the stands, I was too upset to appreciate what I’d just witnessed. As a man of 36 now, battle-weary from 24 years of highs and lows, I can reluctantly say, ‘Christ, that was one hell of a goal.’ One in a million, never to be repeated (er, until Ronaldinho lobbed Seaman at the 2002 World Cup).

Trudging away from the Parc de Princes, teary eyed (because the police had fired tear gas at us, but that’s a story for another day), a fellow fan tried to console me, “Don’t worry son, there will be other finals.”

And there has been. Eleven years later I was back in Paris for the 2006 Champions League Final at the Stade de France. Different stadium, new Spanish opponents, same result. Complete and utter heartbreak.