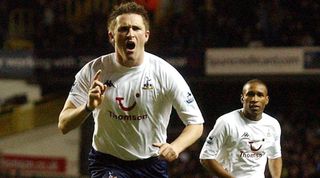 Having been born in north London in 1992, I grew up during one of the most abject periods of Tottenham Hotspur’s history. Despite that, I’ve seen important goals, scrappy goals, cup-winning goal(s) but, if I’m honest, not many truly beautiful goals.

I could probably pick any one of Gareth Bale’s from his final season at White Hart Lane; when everything the Welshman touched turned to gold. Jermain Defoe, Dimitar Berbatov and Harry Kane have offered plenty between them, but this is the greatest I’ve seen in the flesh; my favourite. Let me explain why.

My mum and dad made the decision to move to Brighton when I was 11 and so, after years of being round the corner from White Hart Lane, I was now a world away – that’s what it felt like, anyway. Trips to the Lane became less frequent and I was now surrounded by a new breed of football fan: Brighton supporters. They were battling for Championship safety and to keep their club afloat. With Martin Jol at the helm, we were pushing for a place in Europe.

When we were drawn against them in the Third Round of the FA Cup, dad said we had to go. I agreed.

After a couple of weeks of abuse from my new Brighton-supporting mates, dad and I travelled up to N17 for my new, personal derby.

Something I’ve always found with Spurs is that you can tell what the performance will be like in the first five minutes. This was flat – really flat. Brighton looked up for it and were knocking the ball round effortlessly. Beautiful, dynamic stuff that really worried me. All I could think was how I'd be absolutely battered at school if we lost. Then, just before half-time, Reto Ziegler whipped in a ball which was met by my hero Ledley King, who looped his header over Brighton keeper Michel Kuipers and into the net. Relief.

A quick pee and a pie later, and the second half was underway. We started badly – again – and few minutes in, big bastard Richard Carpenter punished us by cracking home a stylish, angled free-kick from around 20 yards out. We were sitting right next to the Brighton fans and they were in raptures. It was game on.

The Seagulls could smell blood and were going for the jugular. They hadn’t come to make up the numbers, and their ambition and work-rate far outnumbered what we were offering. Luckily for us, Paul Robinson was having a blinder. As we entered the final 10 minutes, Brighton were in the ascendency. I couldn’t see anything but us ‘bottling it’ and I could tell nobody wanted a replay at the dreaded Withdean – where, coincidentally, my new school did their sports day. I could hear the songs that would be sung. I’d never live it down.

83rd minute. A ball chipped hopefully into the centre of the park from the wing, Defoe making a nuisance of himself on the edge of the box – which created space for that man Robbie Keane.

The Irishman made a move towards the ball, and with his first touch, chested it up into the air. Brighton's centre-back anticipated the danger but got too close, too tight, and as the ball dropped, Keane swivelled and slammed a dipping, swerving volley past a shell-shocked Kuipers. It was, dare I say, Bergkamp-esque. The sensation that overwhelmed me wasn’t happiness or jubilation, or anything like that; it was relief. And that feeling has stuck with me to this day.

That was Keane’s 100th goal for Spurs, and Brighton's manager at the time, Mark McGhee, had given the striker his debut at Wolves. In return, Keane had given his old boss a shirt along with the message: “To Mark, Thanks for everything, 100th goal today!”

It might not be the ‘greatest’ goal in the conventional sense. But it was my greatest goal. It meant more than just passage into the Fourth Round of the FA Cup. It meant I was able to walk into my new secondary school – pride intact – with my head and two fingers held aloft. Thanks for the memories, Keano.

The Nazis at Tottenham: Why did the swastika fly at White Hart Lane?

Quiz! Can you name every Tottenham player used by Mauricio Pochettino in the Premier League?