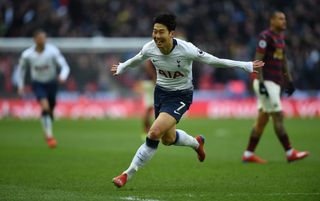 What a difference three years can make. Straight off the plane from the Asian Cup and battling jet-lag, Son Heung-min has reinserted himself back into Tottenham’s season at just the right time. He provided the energy in the come-from-behind win over Watford just days after returning and, 72 hours later, was the difference against Newcastle, shimmying on the edge of the box and driving a violent shot through Martin Dubravka to settle a one-goal game.

Within that sequence lay nothing new; nothing which hasn’t been seen before. Son has always been able to knot up a defender and shoot with power. The difference, it seems, lies in his appetite for that kind of situation and this growing propensity to be at his very best when the anxiety around him is at its thickest. It’s not a situation which many would have foreseen, particularly given how his career in England began.

In May 2016, he was among the worst of a rotten bunch at St James’ Park. Tottenham would lose 5-1 to an already-relegated Newcastle United on the final day of the season, allowing Arsenal to slip ahead of them during the season’s final act and condemn the fanbase to a summer of ridicule.

Son was dreadful. He was substituted at half-time after a disengaged and detached 45 minutes, and replaced by Josh Onomah. It might even have been the epitaph to his Tottenham career. In the summer of 2016, discouraged by his initial failure to adapt, he had wanted to leave. A German club had offered quick passage back to the Bundesliga and just 10 months after arriving from Bayer Leverkusen, he was eager to return to this comfort zone.

In hindsight, it was hardly a surprise. Son had joined Spurs in the last days of the summer transfer window in 2015, without the benefit of a pre-season. As subsequent events have shown, Mauricio Pochettino makes players earn his trust: a big transfer fee and a famous name don't offer a quick entry to his first team. Moussa Sissoko has learned that lesson, while Lucas Moura is still learning it now.

Son’s early Tottenham career offers the clearest explanation for why that is. In those days, despite his talent and abundant ability, he was the out-of-tune instrument in the orchestra. While his soloist tendencies occasionally produced spectacle, those contributions weren’t always for the greater good and, at their worst, actually weakened the buttressing structure at the core of the Pochettino brand. He was a fantastic player with the ball at his feet, certainly, but one still prone to long periods of anonymity and, against the very best teams, liable to have his defensive shortcomings exposed.

There were more abstract criticisms, too. Maybe it was distrust bred by something illusory, and Son seemed initially to be a fair-weather player. He would be the decoration on a fine performance, but rarely the reason for it – and that helped to perpetuate pre-existing assumptions about foreign players adapting to English football. The British game is enslaved to its own primacy, that will always be true, but it remains very distrustful of anyone who enters from outside mainland Europe.

Much of Son’s footballing education was actually traditionally European. He arrived in Hamburg as a 16-year-old and graduated into professionalism from inside the Bundesliga system. But Asian players have always had an uneasy relationship with the Premier League. Park Ji-sung was extremely successful at Manchester United and Shinji Okazaki won a league championship with Leicester City, but in the competition’s 27-year history there have been few authentic stars. For each Park or Okazaki, there was a Junichi Inamoto, a Li Tie and a Kazayuki Toda. The game may now be becoming more globally homogenised, meaning that regional stereotypes are often assumptive and wrong, but for a long time the tenets of the sport in Britain and Asia were significantly and problematically different.

Even with those precedents, though, Son’s case is still unique. He’s certainly the most dynamic footballer the region has produced and, over time, has also proven himself to be the most destructive. He wasn’t purchased primarily for commercial reasons and he wasn’t sought out for his neat skill or his industriousness. None of those antiquated cliches applied to him. Instead, and unlike any Asian player to move to this country before, he was purchased to be an incendiary headliner.

That necessitates a distinction: between adapting to a new league in a manner which allows a player to function, and in a way which allows him to actually conquer it. They are different processes, clearly, and also come with different timelines and difficulties; Son was signed to dominate markers and fracture defences, not just to fulfil a narrow, 15-games-a-season purpose. Living up to that billing would have been a trial and so, in retrospect, it’s easy to draw straight lines between his initially-peripheral involvement, his sporadic impact and that reflexive desire to head back to Germany.

But as a first-class Asian footballer, he is also a novelty. Although some very fine players have originated from the continent, few have existed in quite the same sphere of celebrity. Sungmo Lee, who reports on Son for Goal.com, explains the true dimensions of his fame: “Son is a national treasure. He's the biggest sports star in South Korea - although I would say his popularity exceeds the boundary of 'sports star' and he's now the nation's biggest celebrity.”

As Sungmo also explained, that’s particularly interesting because football is not the country’s most popular sport: it’s baseball. There’s evidence to suggest that the ratios are shifting and that sporting tastes are starting to become more influenced by the West, but football certainly doesn’t occupy the same societal place in Korea that it does in England.

Through that lens, Son’s first year at Tottenham would have been particularly troubling. All reports depict him as a humble and family-orientated man, but balancing reduced status with such concentrated local celebrity would have been an obvious mental challenge. It’s hard to describe exactly why, but it’s likely linked to the manner in which the game is consumed in South Korea.

Domestic coverage of Spurs’ games features a live stat line of his performance, recorded in a graphic more prominent than the score of the game itself. Around the Premier League also exists a network of Korean and Japanese journalists who track native players, reporting specifically on their progress; Maya Yoshida at Southampton, Okazaki at Leicester, and Yoshinori Muto at Newcastle are all followed by journalists assigned to them specifically.

Clearly, then, to be an Asian footballer in the Premier League is to be scrutinised. But to be an Asian footballing icon and to not be integral to a side would have been very trying indeed – and not because of ego, delicate pride, or any other traditional frailty. Famous English players who move abroad have certainly piqued interest in the past, but always in a relatively passive way. That’s the privilege of coming from a long and deep footballing culture. Son may not necessarily have been aware of it, but he hasn’t had that kind of protection, serving more as a general avatar for South Korean football. With that comes frenzy, pressure and, for a young adult, a greater stress on the need for maturity.

Those issues seem to tally with Sungmo’s own private observations. While anyone can detect technical refinement and growing efficiency, he traces Son’s improving performance to his adaptation to a new reality: “During those three years, Son became captain of the South Korea national team, and at the same time started to evolve into a leader at Tottenham. For both teams, he's showing more responsibility as a senior player than he did in his early 20s.

“I would say he's much more mature as a player and as a person,” says Sungmo. “He also became calmer than before, I feel.”

ANALYSIS Mauricio Pochettino is masterminding his biggest achievement yet at Tottenham

OPINION Why Arsenal's big task is to be more like Tottenham

‘Calmer’ is a telling description. A reassuring one, too, which possibly has more than one root. Son has grown to become an accepted top-level player in England (at the time of writing he is well in contention for the Player of the Year award) and, by virtue of South Korea’s gold medal performance at the Asian Games, is now exempt from his national service. Most likely, it would have been deferred to the end of his career regardless, but under normal rules men are required to serve two years in the national military between the ages of 18 and 28. What effect that looming deadline had on him can only be speculated upon. What can be said, though, is that time pressure rarely helps a sporting career and, for Son, the need to accentuate the value of his prime years would have been especially pressing.

Collectively, these are just subliminal factors. In the present day, Son is the player he is because of myriad tactical issues and his value can be diagnosed with more traditional footballing assessment. His speed is both a tremendous asset to Tottenham’s counter-attack and a great influence upon it. His relationship with Harry Kane and Dele Alli is the basis for their attacking chemistry. Pochettino's trust in him has also grown exponentially and there are few players who the Argentine talks about with such obvious affection.

Nevertheless, Son the person seems to have evolved at the same rate as the player. From Tottenham’s perspective, with Kane limping around at the Super Bowl and Dele still recuperating thousands of miles away, it’s really just as well. Their out-of-tune instrument has become the rhythm of the orchestra itself, with Son setting the tone of this unlikely challenge to Liverpool and Manchester City.