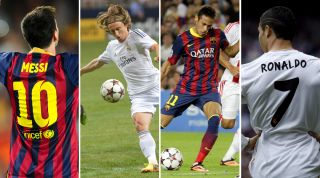 Tactically, Saturday’s clash between Barcelona and Real Madrid is surely the least predictable Clasico for years.

In recent times, it’s been easy to predict the shape of the game – the two clubs met 17 times over the last three seasons, and the battles become familiar. Besides, the favoured playing styles of Pep Guardiola and Jose Mourinho were so distinct that their strategies were obvious: Barcelona would dominate possession, while Madrid would play a reactive game, usually in a 4-2-3-1 system.

This time around, things are less certain. Barcelona have a new coach in Gerardo Martino, who has a more pragmatic coaching style, even if he’s embraced the club’s traditions. He is yet to coach a game of this magnitude, however, and his approach could change.

Real Madrid, too, have question marks ahead of Carlo Ancelotti’s first Clasico. He’s used a variety of systems this season: 4-4-2, 4-2-3-1 and 4-3-3. He’s yet to decide upon his best midfield trio, he hasn’t been able to integrate Gareth Bale into the side (and Angel Maria deserves to retain his place in the side on current form), while Karim Benzema has been playing extremely poorly up front. Ancelotti has a variety of options, but no obvious solutions.

So where will the game be won and lost? That will rest largely on the answers to a few key questions.

Assuming Ancelotti doesn't decide to select Cristiano Ronaldo isn't selected up front – either alongside Karim Benzema in an attacking 4-4-2, or as a lone striker in a more defensive formation with the Frenchman on the bench – then the Portuguese forward's battle with Daniel Alves will be particularly crucial.

In his early days at Madrid, Ronaldo found himself once consistently pinned back into his own half by Alves; indeed, he sometimes switched sides to the right flank, partly in order to get out of his defensive responsibilities. However, recently Ronaldo has started to get the upper hand against the Brazilian.

Barcelona’s pressing isn’t as intense as a few years ago, and Alves’ attacking game is more risky – Ronaldo seems to find it easier to collect possession on the run and counter-attack at speed these days, and Barcelona will need to get a second player, probably Sergio Busquets, in a covering position.

Ronaldo played his usual game in this fixture last year, receiving the ball on the left and cutting inside to score twice.

Alves had an interesting game against Milan in midweek, playing an attacking role but being much more successful with his tackling than his crossing.

Will Modric be Madrid's pass master?

A player with a particularly important role will be Madrid’s central midfielder Luka Modric. Ancelotti is still without Xabi Alonso, the man who sits deep and usually sprays the first pass into attack to prompt quick breaks, and with Asier Illarramendi yet to demonstrate his true quality in that deep-lying role, Modric must take responsibility.

The Croatian performed well against Juventus in midweek and will bring two qualities in particular. First, there’s his reliable passing – he’s unlikely to play many penetrative passes, but he’ll fire good sideways balls out to the flanks, allowing Ronaldo and Di Maria (or Bale) to run with the ball at speed.

Second, he also has a magical ability to slalom away from opposition challenges, which will be especially important against a side that presses high up the pitch. Busquets has been particularly aggressive with his closing down this season, and Modric’s change of direction could be crucial in Madrid’s attacking moves.

He demonstrated his reliable distribution against Juventus in midweek, completing exactly 100 passes out of 104, and recently against Levante showed his ability to dribble away from opponents.

What will Neymar do?

Barcelona’s joker is Neymar. In his first Clasico, the Brazilian forward will be desperate to make an early impact – he’s adapted seamlessly to Martino’s system, cutting inside from the left of the 4-3-3.

He’ll be up against Alvaro Arbeloa – and while the ex-Liverpool right-back has occasionally impressed with his attacking this season, he’ll surely be instructed to remain in position. Barcelona are more lethal on the counter-attack under Martino, and leaving space in the full-back positions could be suicidal.

Neymar has collected a goal and an assist in each of his last two La Liga fixtures at the Camp Nou.

Will it all come down to Messi?

Leo Messi returned from injury with a goal against Milan in midweek, and his role in this game will be interesting: will he play as a false forward, dropping deep to help overload Madrid in the midfield zone, or will he remain higher up as something of a traditional striker?

In some matches this season, he’s simply appeared as an old-school centre-forward when Barcelona have dominated possession, although against Sergio Ramos and Pepe he’s likely to revert to his old role, tempting them out of position: his passes received in this fixture last year took place in extremely deep positions.

Madrid's centre-backs have never entirely worked out how to stop a fully fit Messi, and more than any other player, he could make the difference.