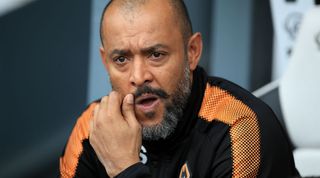 Wolverhampton Wanderers lost 3-1 to Derby in April – but rather a lot has happened to them since then. Of the team that beat the Rams 2-0 on Saturday, only Romain Saiss and Conor Coady started that defeat three-and-a-half months ago, the result of 13 summer signings and a new manager in ex-Valencia chief Nuno Espirito Santo .

Jorge Mendes’s fingerprints are everywhere: newbs Ruben Neves, Diogo Jota and Roderick Miranda are all represented by his Gestifute agency; so too is boss Nuno. Several more players have joined from a network of Mendes-influenced clubs, following last season’s high-profile arrivals of Helder Costa (Benfica) and Ivan Cavaleiro (Monaco).

The difficulty for Nuno, then – albeit a welcome challenge at this stage – is ensuring that the individual quality at his disposal can combine to be effective in what is a very unforgiving league. Few clubs manage to make wholesale changes and succeed – as Nuno would happily testify from his Valencia days – but, after two wins from their first two games of the season, Wolves are aiming to become an exception.

In Nuno, Wolves now have a manager who will embrace the luxurious position he finds himself in, rather than fight against the tide of change. Former coach Paul Lambert didn’t always utilise the new pool of talent available to him; Manchester United left-back Cameron Borthwick-Jackson, for example, was benched for much of last season despite Jose Mourinho – yet another Mendes man, of course – sending him to Molineux for regular playing time.

Nuno has also changed the formation to 3-4-3; lesser spotted in the Championship, but currently the Premier League’s most fashionable system thanks to the success of Chelsea and Antonio Conte last season. This could be Wolves’s gain throughout the season, since many of their opponents won’t be as used to countering them. On Saturday, for example, the visitors’ wing-backs enjoyed freedom against Derby’s narrow 4-3-3, and the Rams’ equivalents weren’t particularly adventurous for a home side.

Nuno likes his teams to press out of possession and counter-attack in a direct manner. Most impressive from a tactical point of view, however, is the positional sense that the Portuguese’s side are demonstrating already. They looked well drilled and organised for a team with so many new additions, numerous nationalities and an unfamiliar formation, especially in the first half at Pride Park.

Former Liverpool youngster Coady played at right-back under Lambert last term, but now occupies a place in Wolves’s back three and is captaining his team this year. The two team-mates alongside him, Miranda and Willy Boly, were both only signed this summer, so Coady has quickly grown in importance and is key to making Nuno’s new system work. Against Derby he provided some important interceptions on the rare occasions Wolves got dragged out of shape.

Boly, signed on loan from Porto having made seven appearances for the Portuguese side last season, is commanding in aerial battles, while Miranda – previously a first-team regular for Rio Ave in the Primeira Liga – offers better distribution.

Wing-backs Matt Doherty and Barry Douglas (the latter landed from Turkish club Konyaspor), meanwhile, worked tirelessly to provide width and stretch the pitch. Wolves’s first goal came as a result of Derby’s narrow defending, which allowed Douglas to arrive late into the box and hammer a strike past Scott Carson.

In central midfield, the Championship’s most expensive player Ruben Neves – the 20-year-old formerly spied by some of Europe’s biggest clubs; of two Portugal caps and 20 Champions League appearances – aims to dictate the tempo and keep Wolves’ play flowing. He will soon realise just how much less time he’ll get on the ball in this frantic league, but surely establish himself as the division’s finest player once fully climatised.

Wolves’s attacking arrivals mostly joined in the last few weeks, so they’re gradually improving at the sharp end and are more impressive defensively for now.

On Saturday, Derby’s search for an equaliser allowed Wolves to play to their strengths as the game became more open, particularly for Atletico Madrid’s on-loan winger Diogo Jota. The playmaker was denied by Andre Wisdom shortly after half-time, hit the post two minutes later after combining well with Leo Bonatini, and later embarrassed three Derby players with his quick feet before being fouled.

On the other wing, Bright Enobakhare – a 19-year-old Nigerian who signed pro forms with Wolves in 2015 – is a stronger, more robust player tasked with supplying the service for striker Bonatini to thrive on. The Brazilian, who scored the winner on the opening day against Middlesbrough after joining on loan from Saudi side Al-Hilal, is Wolves’s focal point up front and links up well with the trickier flair players around him.

There’s more to come too: the £7 million Ivan Cavaleiro came off the bench and immediately improved Wolves’s fluid frontline in making his first appearance of the season after suspension. Last season’s fans’ and players’ player of the season, Helder Costa, isn’t even back from injury yet.

“I’ve been impressed with them when I’ve seen them; I think you can see elements in their game that they will cause teams problems,” said Derby manager Gary Rowett post-match. “I think they've played against two decent teams to start with in Middlesbrough and ourselves. They look like they’ve recruited quite well also, but again they’ve spent large money.”

He's not wrong. Wolves’s investment has reaped early rewards, but also comes with high expectations – only Middlesbrough are shorter odds to win the title this season.

It’s early days, but fans at Molineux are rightfully ambitious about being entertained.