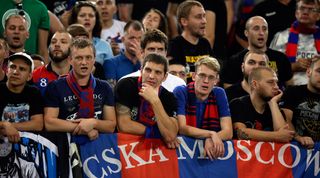 CSKA aren't your usual top Russian club, as the following will show.

When Anzhi Makhachkala were forced into a fire sale in summer 2013, the title contenders jumped on the opportunity. Dinamo Moscow bought no fewer than six players; Lokomotiv purchased two (Mbark Boussoufa and Lassana Diarra, who both went AWOL for a couple of months this summer); Spartak added the Brazilian stopper Joao Carlos, who soon became surplus to requirements; Zenit spent heavily on Oleg Shatov.

CSKA were the only team that didn’t join the party, even though they needed reinforcements much more than the rest. By the end of the season, the champions retained their crown, finishing with 10 consecutive wins to erase a deficit that stood at nine points in March.

Such an achievement is remarkable given the thinness of their squad. President Yegveny Giner believes a football club can and should be profitable, doesn’t buy expensive stars and uses a good scouting network. When no quality players are available at low cost, coach Leonid Slutsky literally has to work miracles.

Believe it or not, but CSKA have only had one natural striker in their squad for three seasons now – the injury-prone Ivorian Seydou Doumbia. When he is out, Slutsky is forced use Nigerian winger Ahmed Musa in his place, and that’s how he won the league and cup double in 2012/13.

CSKA also have just three centre-backs – Sergei Ignashevich and the Berezutsky twins, Vasily and Aleksei. If two of them are injured or suspended, the team will be in desperate trouble.

Given these conditions, Slutsky must be given immense credit. At the club since 2009, he works in perfect harmony with general manager Roman Babaev and president Giner, who refused to accept his resignation in 2012. Their playing style might not be the most attractive, but CSKA are a model of stability, as opposed to their rivals who frequently change coaches and players.

CSKA’s main strength lies in their teamwork and togetherness. While Zenit are notorious for dressing room squabbles and Spartak usually in a state of chaos, the Army Men are a very unified and coherent group. They are careful not to sign players who might disrupt that atmosphere, and every new member feels at home.

CSKA stars are unselfish on the pitch, pushing in the same direction. Coaching stability means they are familiar with the system and know what is expected of them. Since the squad is thin, many players are used to filling different positions, and they can seamlessly adjust to tactical changes during matches.

The team used to be rather predictable in attack last season, but it changed this term with the arrival of Roman Eremenko and Bibars Natcho. The two friends, who used to play together for Rubin Kazan and have a great mutual understanding, are imaginative and technically sublime midfielders who have added a lot of creativity and are fast becoming the undisputed leaders. As both are on song right now, scoring nine league goals between them, they are definitely capable of posing a significant threat to Manchester City.

Naturally, injuries and poor form of top performers can be disastrous. That’s what happened to CSKA last autumn when they finished bottom of their Champions League group behind Bayern Munich, Man City and Viktoria Plzen, losing twice to the Citizens.

They are better off going forward these days, but can be suspect at the back. Keeper Igor Akinfeev and the two centre-backs, Ignashevich and Vasily Berezutsky, have played together for more than a decade – a truly unique relationship. But not all of them are in top shape, making CSKA's defence their weakest link.

Akinfeev is still trying to come to terms with the World Cup fiasco in Brazil where two dreadful mistakes cost Russia very dearly. The rearguard is slow, as demonstrated by Roma who took the Russians apart in a 5-1 win at the Stadio Olimpico in September. This is especially important because defensive midfielder Pontus Wernbloom is suspended (he will be eligible in Manchester).

Slutsky always plays 4-2-3-1, but it is a rather fluid system. Full-backs are usually active joining the attacks, while central midfielders – especially Eremenko – are given free hand to roam wherever they want.

Doumbia is a mobile striker who sometimes drifts back to make way for Georgi Milanov, Musa and Zoran Tosic to cut into the penalty area. The Serbian, a former Man United player, treats games against City as a personal derby and scored against them last season. Natcho is a dead-ball specialist who shoots from distance.

CSKA are a team, first and foremost, and it is difficult to single out a key player. Eremenko and Natcho are extremely important, and taking them out of the game is a good start. Ignashevich and Berezutsky are also crucial as the most experienced players. CSKA will be slaughtered if they have another off day.

Picking Doumbia as the key player also makes sense. The striker who scored a brace at the Etihad Stadium last November possesses an unpredictable dribbling style and is lethal in front of goal. He was the Russian Premier League's top scorer twice (in 2012 and 2014) and is leading the charts again this time, scoring six goals in seven games, including braces in the last two fixtures.

Unfortunately for CSKA, they have become infamous for crowd problems. Even though their ultras are better on average than those of Spartak and Zenit, the small fraction of criminal hooligans have caused the club a lot of trouble. Their misbehaviour in Rome forced UEFA to order CSKA's home group games to be played behind closed doors, at least ensuring that Yaya Toure will not be racially abused.

CSKA are a club of heritage with many legends. One of them is the amazing Vsevolod Bobrov, who played football and ice hockey at the same time in the 1940s and 50s. He captained the Soviet football team at the 1952 Olympics and the Soviet hockey team at 1956 Winter Olympics – the only sportsman in history to do so.