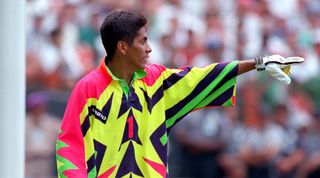 I designed all of my goalkeeper shirts with a friend in Acapulco, and then we ordered them to be made.

I wanted to do something a bit different, but I'm not a cartoonist, so I asked him to take some of my ideas and put them down on paper. Then the brands started showing interest – I signed with Nike and we made them with their brand designer.

Colours were what I liked most. Shirts generally have more colours now – perhaps that was all thanks to me. I was ahead of my time! I never dressed colourfully in normal life, though: sometimes I went to parties of my friends’ children and they didn’t recognise me because I wasn’t dressed like I was on the pitch!

I often played as a striker – as a child, a teenager and then for the first team at Pumas, because for two years I was a full-time striker. Adolfo Rios was the goalkeeper there so I asked to play
up front and started scoring goals. The coach always told me that I shouldn’t forget I was a keeper. I used to laugh, because I was the top scorer at that time.

I can remember the first goal I scored so clearly. We were losing 3-1, I scored and celebrated like crazy, but suddenly I realised I was alone. My team-mates yelled at me, “We’re still losing!” but I didn’t care – I’d scored! I played in both positions after that. It was difficult to train for both. In an ideal world, I’d have liked to play as a goalkeeper in the first half of matches and a striker in the second half.

Normally it was when we were losing that they changed my position. I enjoyed it, and there’s no one else in history who’s done it. I was very short for a goalkeeper – only 5ft 9in. But playing as a striker helped me as a keeper, too, because I knew what my opponents were going to do. It allowed me to be quick and reduce angles – the more you rush out, the smaller the goal is for strikers. Some coaches told me that I took too many risks, but it worked really well for me.

I played 130 times for Mexico. Representing my country was the most beautiful thing. I once heard a story that the coach [Miguel Mejia Baron] thought about playing me up front against Bulgaria in the last 16 at USA '94, but that didn’t happen. Then, at the 1998 World Cup, they banned goalkeepers from playing outfield. Unbelievable! I’m going to talk to FIFA about that some day.

The first Nike advert I was part of was for the 1994 World Cup. There was Eric Cantona, Bebeto, Romario, Paolo Maldini, Tab Ramos and me, and they projected us on walls. Then I took part in the Good vs Evil advert in the Colosseum. They were the first ever commercials made like that, involving players from across the world. It was amazing to be surrounded by so many stars, and to realise that they knew who I was, because I’d never played in Europe. It was special to share the experience with them, with the Colosseum full of people chanting our names.

I couldn’t move to a European club because the price that Mexican teams put on me was too high. Luckily, I was always invited to the Rest of the World matches – it was incredible to be inside that dressing room. But we all spoke different languages, so the manager didn’t know how to communicate with us!

I never thought I’d have so many fans all around the world. In Mexico I’d travel through neighbourhoods and I always saw children wearing my goalkeeper top. And everywhere I went around the world, people knew who I was and asked me for my autograph – the ’90s were something special for me.

I’d pretend that I wasn’t Jorge Campos sometimes. When people recognised me, they were so surprised to see me on the street and would tell me, “Hey, you look like Jorge Campos”. I’d answer, “Yes, people always tell me that”, and then they’d say, “Only he is much taller and stronger.” I’d reply, “And uglier, too!” But when they heard me talk, they realised it was me.

I was assistant to Ricardo La Volpe during the 2006 World Cup and I've thought about being a coach. Now I’m a TV commentator. I like doing it a lot because you’re never wrong...

This feature originally appeared in the February 2018 issue of FourFourTwo. Subscribe!