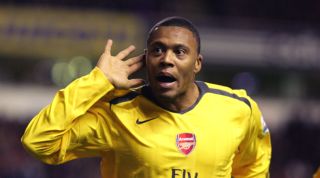 Arsenal chased Julio Baptista when he was at Sevilla, with Arsene Wenger keen to add a combative striker to his side - when the Gunners eventually lost the battle to sign him to Real Madrid, they still didn't give up hope and ended up bringing him to North London a few years later.

Speaking in the March 2020 issue of FourFourTwo - still available to order online - the man himself exclusively revealed that the feeling was mutual and that he loved his time with the Gunners as much as the club admired him.

"I had a great time there – I’ll always be grateful to Arsenal and the English people. They are very polite and have huge respect for others," Baptista reveals in the March 2020 issue of FourFourTwo. "My time at Arsenal was an important stage of my career."

"I’m proud to have played for the Gunners in a squad with a mix of young guys and experienced players such as Thierry Henry and Freddie Ljungberg."

Baptista moved to the club in 2006, during the club's first season at the Emirates Stadium. Though he struggled for goals in the Premier League, the Brazilian was prolific in cup competitions and will always be remembered fondly by Arsenal fans for one night in particular.

"I scored four goals in one game at Liverpool," he remembers of Arsenal's 6-3 thriller away to Liverpool. "In England, you can take the match ball home if you score three or more goals in a game, so I found myself leaving the pitch with the ball under my arm and seeing the Liverpool fans clapping me."

"I was confused, but I soon understood what it meant and was really impressed with their gesture."

The respect the Baptista saw from the Anfield faithful is what sticks in his mind most about English football.

"Playing in England was a different experience from every other place I’ve been," says the 38-year-old, who spent three years at Roma in Serie A before spells at Malaga, Cruzeiro, Orlando City and CFR Cluj before retiring in May of last year.

"They love football, but they understand it’s just a sport and you must respect everyone. Everyone wants to win but you must behave properly, win or lose."

"Even after watching their team lose an important game, [the Liverpool fans] were kind enough to appreciate an opponent’s performance – I’ll never forget that."

Read the full interview with Julio Baptista in the March 2020 issue of FourFourTwo magazine, available in shops and online now. While you’re here, why not subscribe to the mag - just £9.99 for the first six months, over £38 cheaper than buying it in the shops!