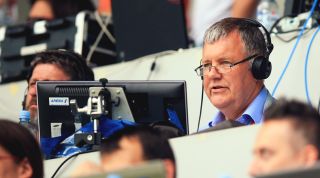 Tributes rang out for Clive Tyldesley on Tuesday. He trended on Twitter all morning, as football fans of all biases scribbled their favourite Tyldesley-isms onto their timelines, like a giant yearbook commemorating a career.

Only his switch from being ITV’s main football commentator to Sam Matterface’s deputy felt less like the natural passing of the baton, and more like the regeneration of a new Doctor Who. Tyldesley sat in his kitchen explaining how he really doesn’t want to go, rather than thanking everyone for the kind words and reflecting on his career.

“I was told about it three weeks ago so I have had some time to get my head around the decision,” Tyldesley said, “But I haven't got my head around it. To be clear, it is ITV's decision, not mine.”

His replacement,  Matterface, is a sound choice. Let’s be honest: Twitter users’ belief that he lacks gravitas for the big occasions no doubt stems from his lack of opportunity in Clive’s shadow. It’s difficult for Matterface to compete with a voice that basically willed Ole Gunnar Solskjaer’s shot into the Bayern net – and he won’t convince anyone by just doing mid-afternoon World Cup group games that Jon Champion and Ally McCoist haven’t backpacked out to.

But as much as ITV’s decision to bring in Matterface is a testament to his good work on the channel for six years, it’s a decision that feels motivated by a big question. How can broadcasters tempt the next generation to buy into their product?

ITV have replaced me as their main football commentator... pic.twitter.com/S8UOjvwEckJuly 14, 2020

Rumours circulate like vultures every couple of months about who at the BBC is currently sharpening a knife to bury between Gary Lineker’s shoulder blades. 5 Live is particularly hot on bringing in younger faces where necessary – and sometimes, where not. Pundits, similarly, are Benjamin Button-ing; millennial footballers who you forgot were on standby for South Africa in 2010 are regularly plonked in Mark Lawrenson’s cold chair at the big, glass desk, so we can hear their hot takes on pressing and just how modern Pep Guardiola really is.

But the people who pay for Sky Sports tend to be men over 40, with the disposable income to spend £30 a month or more on sports coverage. Sky’s viewing figures fell 14% the season before they rebranded to football, golf and F1-specific channels. The price of packages dropped, too: consumers are not getting younger.

Channels are beginning to panic that they’re not doing enough to get the kids of today watching Jeff Stelling for a full 90 minutes, rather than his best bits on YouTube. Clearing out bigger names also cuts costs that are being lost from falling revenues: it’s economical not to extend the headline act’s contract, and instead bump up an office drone who is thankful for the opportunity. It’s no wonder the BBC are so keen to shuffle the older lot along when the corporation is state-funded and multi-million-pound contracts aren’t justifiable anymore.

Football broadcasters now face the same conundrum that the music industry was met with: how do you convince kids with a means to download and stream content for free so easily… well, not to?

The answer isn’t so much in cutting the likes of Tyldesley, though, who is still on top of his game and represents a large demographic who tune into ITV’s service. Platforms like Spotify, YouTube, DAZN – even the pop-up-laden streaming sites that the Premier League are desperately trying to click the “X” on – are popular because they’re convenient and cheap. It's not because they’re down with the kids – MOTDx alone probably isn’t going to ensure another that generation pays the licence fee.

As his home-bound angst bounced around the internet for a bit, 'Clive Tyldesley video' weren’t the only three words trending. 'BT or Sky' seemed to be high up on users’ most tweeted phrases, suggesting one of the extraterrestrial giants should pounce for the commentator. They well might: particularly BT. The company have swooped in for big names over the years like Peter Drury, Rio Ferdinand and even Lineker himself, recognising that as a broadband provider first and foremost, they can tap into parents paying for the Wi-Fi and offer them TV channels. Sky was a TV network first that merely expanded into other services.

Whether it’s on BT or otherwise, Tyldesley doesn’t leave broadcasting altogether. He’s said himself that he’s not done with the game. Whether or not ITV are done with him, though, broadcasting seems to be shifting – but it would be nice if it found more innovative ways to bring in new audiences.

While you’re here, why not subscribe to the mag – just £9.99 for the first six months, over £38 cheaper than buying it in the shops!

QUIZ Can you name every country to compete at a FIFA World Cup?