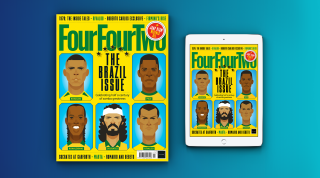 First a message from our editor, James Andrew

Rejoice! By the time you read this, football will be back in England. And while many questions about its future remain unanswered, its return is a hugely positive step.

For this issue, though, we’re focusing attention elsewhere. Regardless of your age, you’ll have at least one Brazil team that you look back on with fondness – whether it’s a young Pele winning in 1958, Garrincha’s snake hips of 1962, the technicolour kings of 1970, or more modern sides featuring Cafu, Romario, Ronaldo, Rivaldo, Ronaldinho and Neymar.

We hail the mighty Selecao 50 years on from their 1970 triumph. Rivelino talks us through that glorious tournament first-hand, while we evaluate why Socrates & Co. didn’t succeed in 1982, speak exclusively to Roberto Carlos and Marta, remember when Rivaldo ruled, and chart Roberto Firmino’s ascent.

During my early days in journalism, I covered a Fulham pre-season tour of Austria. After a 0-0 draw with Real Madrid, I asked England captain David Beckham for a photo. He agreed and called over his team-mate to take it, then told me, “He’ll be a star”. That player? One Robinho, whose rise and fall is also captured.

We hope you enjoy the magazine – order yours now with free delivery.

Why the world loves Brazil

Brazil’s global domination may have begun early, but it was in 1970 – aided by a pivotal decision from Pele – that the Selecao’s popularity went through the roof. Thanks to Socrates, Rivaldo, Ronaldinho, Ronaldo and more, little has changed in the half a century since...

Between The Lines: Rivelino

Brazil’s revered heroes of Mexico 70 conquered the world for a third time with their glittering brand of brilliance – and no shortage of japes. Rivelino remembers life within the greatest international team ever assembled.

Mexico 70: what we loved

Brazil’s defining tournament was also one of many glorious firsts – and arguably the most colourful World Cup finals of all time. FFT celebrates its movie star goalkeepers, amateur pyro and baffling forgotten soundtrack.

The legend of Rivaldo

He won’t go down among football’s most beloved players – just ask Louis van Gaal or anyone in Turkey – but peak Rivaldo was briefly the world’s best. From the greatest-ever hat-trick to World Cup glory, FFT celebrates a superstar.

He won the lot in a stellar career as the most celebrated full-back of his generation – even if he didn’t see it all himself. Now, the thunder-thighed icon discusses life as a samba hero, inspiring Becks and almost joining Chelsea.

When the energy drink giants’ bid for Brazilian domination didn’t go to plan, they simply changed tact and purchased another club. A good call, as it turned out – Bragantino have now reached the top tier and are ready to take flight in their quest for continental glory.

What happened to Robinho?

The hot-stepping sensation was once football’s glittering future, hyped by the greats and destined for stardom. But how will history really remember Robinho? FFT retraces the missteps...

Brazil’s early-90s sensation wowed Diego Maradona and was poised for a big move to Europe, only for a cruel car accident to make his a tragic tale of what might have been. FFT recalls an icon-in-waiting.

She battled bullies, sexism and financial strife to become the planet’s best player, and now wants to inspire a new generation. The Selecao legend tells FFT about her journey to the top.

The making of Roberto Firmino

He defied the odds to become a European champion at Liverpool, after making a miraculous journey from Maceio to Merseyside via a five-year spell in Germany. FFT retells the remarkable tale with those who were part of it.

1982: the greatest ever losers

Tele Santana’s mesmerising all-stars inspired the world and remain revered nearly 40 years on, but ultimately came up just short in Spain. FFT understands how with Zico and the gang.

The Northern Counties East Football League side stunned English football by luring Brazilian great Socrates to West Yorkshire in 2004 – and he wasn’t the only one. FFT learns the extended story of a legendary non-league curiosity.

You Ask The Questions: Jaap Stam

The former Manchester United, Milan and Netherlands man-mountain opens up about his controversial Old Trafford exit, Roy Keane’s quizzing prowess, and the day Diego Simeone nearly set himself on fire at Lazio.