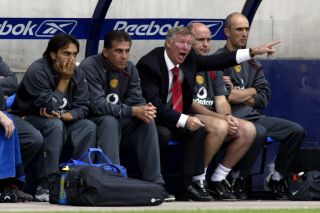 Sir Alex Ferguson’s publisher Hodder & Stoughton have defended the managerial legend’s decision to dedicate over 200 pages of his autobiography to berating referee Matt Messias for an offside decision against Bolton Wanderers in 2004.

There has been much hype surrounding the release of Ferguson’s autobiography, and it looks set to be the best-selling football book in recent years.

But reviewers have stated that while the book opens well, it loses its way when Ferguson breaks off into an aside about what he believes to be a poor offside decision during Manchester United's 2-2 draw with Bolton in September 2004.

Although Ferguson does eventually return to discussing how he handled the pressure of arguably the biggest job in football, many have complained that the narrative drive is damaged by the tangent and the author’s frequent use of the phrase "Hertfordshire dick dangler".

Ferguson may also face questions about his portrayal of former assistant Steve McClaren, who is described as a "busty redhead with a mischievous smile and a sense of fun," and his assertion that Dutch defender Jaap Stam’s head was one large Softmint.

The passage in which Ferguson claims to have sucked gently on Stam’s head while he slept on the team bus to Liverpool before impatiently chewing it to a mangled nub of spearmint mush is difficult to verify, but the episode may have contributed to Stam’s exit.

Possibly the most controversial element of Ferguson’s book is the decision to write all 402 pages of his autobiography with pieces of used chewing gum from his tenure as United boss.

In the foreword, Ferguson refers to this as "the natural choice" but some reviewers have complained that readers don’t necessarily want to have their fingers coated in the saliva residue of a mahogany Scotsman and stressed that once a page is turned it is more or less impossible to turn it back.

Publishers Hodder & Stoughton have responded by pointing out that it is extremely unlikely anyone will want to re-read the book.

At the time of publication, FourFourTwo can reveal that David Moyes has not purchased a copy.