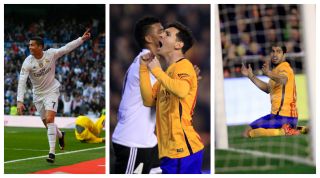 Crisis at Barca! Luis Enrique on the ropes! Dual challenge to title race! None of those are true at all after the weekend which saw Barca expectedly drop points in a mad-for-it, Neville brothers-inspired Mestalla.

But seeing as everything has been going swimmingly for the Catalan club on the pitch for the past few months, it seemed like the right time to keep those Barca-Crisis muscles in use, like a convict doing push-ups in his cell.

It was a fairly drama-free weekend in La Liga aside from Barca’s draw at Valencia. Atlético Madrid and Real Madrid did exactly what was instructed on the tin.

Hero of the day is definitely Sporting Gijon striker Tonny Sanabria, who at the age of just 19 scored the first hat-trick by a Paraguayan in La Liga for just over 30 years. Doncha know.

Barcelona brought down to earth at Mestalla

For once, Barcelona suffered from missed chances - missed points syndrome. Luis Suárez actually had a bit of a stormer for Barcelona in parts (and some throwback defender-wrestling), especially in the first half, but missed a series of chances, most uncharacteristically. Indeed, the second half effort which put Barcelona into a lead at Mestalla was a little offside, although hard to call at the pace that the Catalans play at.

“I’m not MacGyver,” noted Luis Enrique fashioning a key out of a yoghurt pot when asked if he had had a chance to see the replay of the goal. “When you don’t finish off a game, something bad can happen,” tutted Josep Maria Casanovas in Sunday’s Sport.

The result again goes to show that the Clásico is still massively overblown in terms of the title race, as any advantage can be easily undone. But Barca were a little unfortunate to face an invigorated Valencia that had regrouped after the resignation of Nuno last week and looking to turn over a new leaf with Gary Neville watching high in the stands.

Marca summed up the feeling after Real Madrid’s cathartic 4-1 win over Getafe, the first time the team had returned to the Bernabéu after the four goals Barcelona hammered past the hapless home side.

Sunday’s front cover went on the aspirin theme, suggesting that the win and also the slip-up from Barcelona was, as AS editor opined “a good day for Real Madrid, for once.” Even Karim Benzema, Gareth Bale and Cristiano Ronaldo all got onto the scoresheet for the first time since April.

If Rafa Benítez could have chosen a better opponent to face in a must-win match surrounded by all manner of kerfuffle, it was Getafe, who had conceded 15 goals in the previous three visits to the Santiago Bernabéu. A team guaranteed to roll over when required. But there was more fun to be had with how the supporters would react to the Copa del Rey incident, rolled in with the Clásico business. The answer was in a fairly predictable way - feelings were vented briefly, then bird seed was eaten.

Atlético Madrid are still swooping through La Liga like a cloaked Klingon Bird of Prey, piloted by the most Klingon manager of them all, Diego Simeone. For once, though, the Rojiblancos didn’t come away with a narrow 1-0 win against Granada. Instead it was a 2-0 victory in Los Carménes, stemming from a traditional, booming set-piece Diego Godín header and some wizardry from Antoine Griezmann.

Atleti have conceded just six goals in La Liga this season and just one in the past five games, largely down to the work of Godín, who deserves to be on the ‘underrated’ watch-list along with Sergi Busquets (in fact he was named as the best central defender and 18th in our list of the Best 100 Players in the World 2015). As Simeone might say: “mamI' DaneH'a'? nItebHa' mamI' DaneH’a'? Er… would you like to dance with me?”

That was a very narrow escape indeed for Betis. A Celta dither in the final minutes prevented a fifth successive loss for the Seville side at home when Pepe Mel’s men equalised against opponents that were down to 10 men for much of the second half.

However, that combined with another failure to win, meant that some fans were not happy, late doors on Saturday night. “I have no explication for what’s going on with our supporters. I thought we were on top for the whole game,” complained the Betis boss.

Neighbours Sevilla, playing up against a remarkably defiant Deportivo La Coruna, this season, were also somewhat relieved to manage a late point to leave both teams on the same number of points, squeezed into mid-table.

Glass half full for grateful Málaga at San Mames

A point for struggling and troubled Málaga at Athletic Bilbao might look like a fine result, but there was a hint of a missed opportunity for just a third win of the season with the home side down to 10 men for 75 minutes after a straight red for Mikel San José. “We’ll take the point,” was the grateful vibe from Javi Gracia.