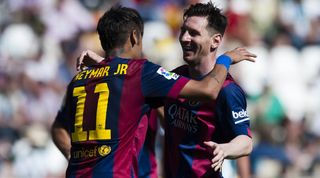 Well that was a bit of a turn-up for the books. There was LLL getting ready to ask Real Madrid if they wanted to give up the final hole of the league championship after defeat to Sevilla. Instead, Cristiano Ronaldo grew so tired of watching everyone else score that he could no longer contain himself and racked up a hat-trick in the Sánchez Pizjuán. Excellent timing. However, one more trial awaits before LLL gets far too excited by the La Liga title race - remember, it could end up depending on the motivation levels of Espanyol and Atlético Madrid in clashes against Real Madrid and Barcelona respectively on the final day. First, though, their penultimate clash of the season - a humdinger against Valencia.

With all the hullabaloo about Barcelona knocking eight past Córdoba, it went largely unnoticed that the home side were relegated in the process. The result, combined with the recent 9-1 victory for Madrid over Granada, showed that a slight equalising in the TV incomes in future might help reduce these thrashings down to more respectable 5-0s. “It was the difference between a team at the bottom of the table and another in the Champions League semi-finals,” lamented Córdoba boss José Romero.

The other matter that caught LLL’s limited attention was that once again Leo Messi played the whole 90 minutes, as if the result was in doubt and a bit of Argentine magic was required. That left Barcelona one angry boot from a frustrated, relegated Córdoba player away from having huge problems in a hefty two-legged affair against Bayern Munich coming up.

The final message from the game, though, goes to Córdoba. So long, and thanks for all the fish.
Cordoba 0-8 Barcelona

Ronaldo bounces back just in time

And that’s why Cristiano Ronaldo’s various irritating traits will forever be tolerated by Real Madrid fans. Carlo Ancelotti’s side faced a possible league-losing clash against a powerful Sevilla outfit, and the Portuguese Man o’ Phwoar came through with a hat-trick, showing why he may be one of the greatest players aerially in the history of the planet.

For a moment, though, it looked like Ronaldo was going to continue irking some in the Madrid camp by celebrating his first goal - which came after some fine work by Isco - by running over to the bench to give Fabio Coentrao a hug. However, the proper team gatherings and general high-fiving took place after Ronaldo’s second and third efforts in the 3-2 victory.

Although Real Madrid had a rough spell at the end with Sevilla looking to keep an unbeaten home record that had lasted for a year intact, the visitors hung on. Barring a mishap at home next week to Valencia, it looks like the future of their title bid is in the hands of Atlético Madrid, who host Barcelona in the penultimate clash of the season.
Sevilla 2-3 Cristiano Ronaldo

It was quite the show of self restraint from Diego Simeone not to go out onto the Vicente Calderón pitch on Saturday and blast the referee/linesman with a face-chilling scream of rage.

In what was already going to be a tight affair against another rumbustious posse of Primera pugilists in the form of Athletic Bilbao, Athletic were hampered by having two perfectly good goals by Antoine Griezmann and Tiago ruled out for offside, as well as a strong penalty claim for a foul on Fernando Torres turned down. Indeed, it's the image of Torres, toe-to-toe with the ref and screaming blue murder, that's the shot most used in the papers to express Atlético’s frustration.

2-0 is Atlético’s favourite result and 2-0 is what Saturday’s game should have been. “Perhaps the ref took two points away from us,” speculated Koke.
Atletico Madrid 0-0 Athletic Club

Valencia keep looking up and down

And so Valencia’s rather confusing, multi-faceted task until the end of the season continues. Keep up with the pursuit of Atlético Madrid in third - now four points away - but also try to stay ahead of the pursuing Sevilla in fifth (now three points away). Luckily, the spiralling Eibar were in town to help Valencia take advantage of a goalless draw for Atlético and a defeat for Sevilla, making fourth spot a little more secure.
Valencia 3-1 Eibar

Deportivo continued to show why LLL has a feeling that the team may well stay up, despite not quite having enough juice in the tank to win any games. To be fair, a potential three-point deduction for Almería might help the Galician side along a bit.

Deportivo haven't won in 13 matches but have drawn six of them. That doesn't sound like a fantastic record, but everything counts in large amounts at a tight bottom of the table. Saturday’s draw was against a visiting Villarreal in a match where the home crowd were very much onside, despite 50 supporters stopping training to have a friendly chat with the players earlier in the week.

One more victory in a home clash with Levante in a fortnight might well be enough to do the job for a club that always adds something to the top flight. Opportunities to have a nap more often than not, to be fair.
Deportivo 1-1 Villarreal

Elche’s once in a lifetime miracle

Elche are one of those stories that defies logic. The team was struggling for much of the season. Players went unpaid and refused to talk to the media. Promises for payments to alleviate the cashflow problems have come and gone. And yet Elche have flourished with an away win at Málaga, putting the side on 40 points after four wins from five.

“People need to be careful because this miracle will not happen again in the next few years,” warned Elche boss Fran Escriba. “The club needs to be cleaned out,” he concluded in a fairly clear hint towards the quality of the current stewardship.
Malaga 1-2 Elche