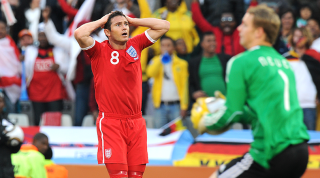 Trailing 2-1 as the interval approached, Lampard larruped the ball off the underside of Neuer's crossbar and a yard over the line, only for Uruguayan referee Jorge Larrionda to wave play on.

And although Steven Gerrard’s free-kick clipped the top of the bar at the beginning of the second period, England failed to find the leveller they knew they’d already scored before the break.

Speaking exclusively in the July 2018 issue of FourFourTwo magazine, Lampard explains that a chance meeting by the pool on holiday resulted in the custodian coming clean about the 'goal'.

“He’s always linked closely to me, as I often get asked about the goal that never was,” says the new manager of Derby County. “I actually bumped into him on holiday last year and we had a joke about it by the pool. He was open to the fact that it was a goal – pretty easy to say years after the event!”

Foot surgery restricted Neuer to just three Bundesliga outings in 2017/18 but he is still set to be Germany’s No.1 when the holders begin their defence in Moscow. Lampard insists the Bayern Munich man's presence will be key if they are to become only the third nation to retain the trophy.

“He’s a fantastic goalkeeper, good with his feet and it’s just the size of him: I took a penalty against him in the 2012 Champions League Final and it seemed like he filled the goal,” says Lampard. “He was a big part of Germany’s 2014 World Cup success – you can’t win it without a great keeper.”

Frank Lampard is part of the BBC’s punditry team for this summer’s World Cup.

Read the full interview with Frank Lampard in the July 2018 issue of FourFourTwo magazine. A ‘Stars of the 2018 World Cup’ special, we also chat to world champion Mats Hummels, Brazil forward Roberto Firmino, England midfielder Jesse Lingard, South Korea icon Son Heung-min and Panama’s Roman Torres. We profile some of the young stars hoping to make their mark in Russia, hear how a hotel fire helped Joan Capdevila inspire Spain to 2010 World Cup glory, celebrate the story of Jamaica’s Reggae Boyz at France 98, and reveal the World’s Cup biggest villains. Plus, Nigel de Jong gives us his take on ‘that’ tackle against Xabi Alonso in One-on-One. Order a copy today, and then become a subscriber!