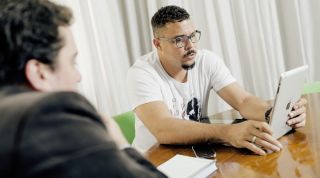 For football fans he will always be “the phenomenon”. But there are many ways to name Ronaldo Nazário de Lima, one of the greatest players in history. Miracle man, wonder kid, R9, Originaldo; team-mates during his golden age on the Brazilian national team still call him “the chairman of the chat”. In FFT's case, though, the wording has to be very different on a sunny Wednesday afternoon at his elegant home in one of the poshest regions of São Paulo.

“Good afternoon, Mister Editor,” FFT says deferentially as he comes into the living room, perhaps the first editor to come to work in tracksuit trousers. The legendary PSV, Barcelona, Inter Milan, Real Madrid, AC Milan, Corinthians and Brazil striker just nods and gives his world famous buck-toothed smile. It's technically his only day off between trips in Brazil and Kuwait.

FFT had met him last year in a High Street Kensington hotel, for the epic re-enactment of the 2003 Galacticos cover - himself, Zinedine Zidane, Luis Figo and Roberto Carlos 10 years later. This time he is just as busy, but much relieved that his job as a World Cup organiser had come to an end.

He is also overjoyed to be surrounded by his family and friends: he actually had to leave for 30 minutes to sing Happy Birthday to one of his maids (great chocolate cake was served, but FFT refused the drinks to concentrate on work).

What hasn't changed is the impact on people who see Ronaldo for the first time. One of the assistants to FFT’s photographer, a 25-year-old Brazilian, is actually shaking. Just like another did in London.

During the three hours FFT spends with the magazine's first guest editor ever, people come in and out in, phone calls are missed - one apparently from Zidane - and the bell rings over and over with deliveries. This is all part of the gigantic industry around Ronaldo, one that doesn’t allow him to just relax when the biggest show on Earth is hosted on his home soil and his marketing company is doing business.

“I sleep when I can,” he says jokingly, while his kids take a nap upstairs. “Do you mind if I leave for a moment to check how they are? My daughter has a cold.” No need for excuses, boss. Shortly after he comes back wearing a Rolling Stones T-shirt: “I figure the English will like some pictures for the editor page with me wearing this one.”

Not many people who come in seem to know that a football legend lives there. After all, he couldn’t have spent much time at home in the last few years. The outside is very discreet: grey walls and a gate. The only exuberance is inside, thanks to arty decorations on the wall, books and DVDs all over and a great sound system.

Not that the decor would necessarily outdo other footballers - Ronaldo’s home is far from the kitsch many footballers love. It looks more like the residence of a successful start-up owner, a new politician climbing the ranks. Trendy books, decoration magazines and design seats are carefully placed. Is it, FFT asks the housemaid, the work of his fiancée Paula Morais? “It's mostly him," she replies. "He is a perfectionist.”

Choosing is always very difficult in journalism. But Ronaldo seems to be a natural: solid arguments to drop stories and interviews, solid arguments to go after others or to pick a different angle. Four times during the meeting, Ronaldo grins “This is great, no one is talking about it”; twice he insists “I would only do this under a different perspective” and once he wisely counsels “We have to be more realistic.” Obviously the guy who went to a World Cup aged 17 learns fast.

“It has been a long time since I last did something for the first time,” he said. “Being the editor of a magazine so many players read is great. But it is surely more difficult to be the editor AND the interviewee!”

For the photo session, friends and family gather, everyone enjoying the faces and outfits Ronaldo puts on as the host of FFT’s 20th birthday party. His fiancée seems to like them all, especially the pictures in which Ronaldo wears the clothes she's picked from his wardrobe. But she also has a clear instruction: “Show that engagement ring to the camera, Ronnie!” He gallantly obeys.

By the time the shoot is over, the assistant who had been shaking earlier feels like his mate: “I bet he noticed I was nervous; he just made me comfortable.” That is true: Ronaldo usually senses that and acts, whether it's a fan he has just met or a young Ronaldinho at the Seleção.

Being more experienced, this reporter thought he was immune to the phenomenal impact. But when Ronaldo says my name, it's impossible not to gasp, and to think: “Wow, this guy is one of the best footballers ever and he knows me.” It is actually simple and brilliant: Ronaldo’s skill of making everyone feel like an old friend is part of what made him such a global icon.

That is also a part of this 20th anniversary edition. Ronaldo is not the guest editor merely because his rise to stardom coincides with FFT’s birth 20 years ago. He is the guest editor because he shares with FFT the skill of treating football with intimacy, even in brief contact. It is a bond shared between those who don’t speak about football as if it were an honourable, unattainable lady; it is a bond shared by those who treat football like an old friend, on a first-name basis.

Get the issue NOW, wherever you are •

What's in the issue?