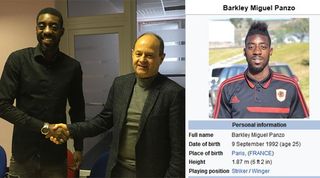 Pity the Panevezys fans who, upon hearing that their club had signed Paris-born Angolan forward Barkley Miguel Panzo, headed over to his Wikipedia page.

As a teenager, young Barkley had apparently hammered in goals like they were going out of fashion at Loftus Road, scoring 45 times in just 36 appearances for Queens Park Rangers. Who is this budding Rodney Marsh?

What a coup for Lithuanian football - particularly after Panevezys repeated the statistic in the official statement released when confirming the transfer.

We're more inclined to believe other versions of his story, which did include a stay in England, but only as a youth player at QPR and in the amateur leagues around Greater London: Panzo spent time at Hillingdon, Northwood, Hendon, Cambridge City and Woking before moving to lower-league French football in 2012.

Panzo has been involved in Angola's national set-up, however, and claims to be friends with Lazio defender Bastos.

Not that Panevezys boss Alexander Kurtian minds either way – Panzo's coach is keen on his new star.

"Panzo left a good impression in friendlies with Wigry and RFS," Kurtian said. "It appears that the player has played at high-level championships."