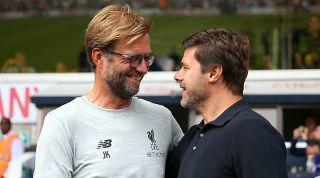 We’re living through football’s era of the individual. When superstars and their stats are fetishised above all else. When fans follow a player as much as they support a team. When the biggest debate of the past decade hasn’t been which football club is the best – which some of us foolishly assumed was sort of the point – but which football player.

It would be ignorant to suggest that individuals haven’t always broken out and become bigger than the game. Pele is the most glaring example of a player who first became a global icon and a brand in his own right, his fame dwarfing any club side he played for.

Yet the 21st century has taken this to a new level, one where it hugely impacts the way the game itself is played. It goes without saying that teams have always had a great player they have lent on; that fans have always had a soft spot for individual heroes. But not like this.

It was clear that when PSG bought Neymar for an eye-watering £200m, they were purchasing more than just an elite striker. That was part of the package, but they were also buying a player whose fame, marketing power and 'brand' was greater than that of the club itself. Getting Brazil’s superstar was meant to be a win-win for both parties. PSG had an icon to pull the eyes of the world toward their club. Neymar, no longer required to play second fiddle to anyone, would have a team built around his talents that could potentially lead to the award he truly covets.

Not any club trophy, but rather the Ballon d’Or – that voted-for gong founded by France Football magazine, which has somehow gone from an enjoyable talking point to the most prestigious honour in the game. At least in the minds of some people (one particular person, probably doing ab crunches in Turin right now, springs to mind).

The bizarre thing about all of this is that football, more than any other high-profile sport, requires genuine cohesion between the moving parts of a team to achieve success. One great player can turn a game or inspire a team, but they can win nothing alone. The travails of the Argentina national team, despite boasting Lionel Messi, illustrates that well enough. As does PSG’s continued struggles in Europe despite their superstar-driven recruitment.

The modern obsession with a single player and how that’s fed into a club’s approaches belies the fact that a football team requires a unity of purpose on the pitch to achieve success. Nowhere has this been better illustrated than in this season’s Champions League.

Ajax, so agonisingly close to the Cinderella story of a final spot, deservedly bested creaking Real Madrid and Juventus sides. Then in two semi-finals, Liverpool and Tottenham pulled off scarcely credible comebacks, particularly notable as both clubs were shorn of their own outstanding individual.

Harry Kane was absent for both legs of Tottenham’s away goals triumph over Ajax. Mohamed Salah missed the 4-0 win at Anfield which sent Liverpool to the final in Madrid. Yet both clubs thrived despite the losses of their most marketable and eye-catching stars because they have excellent managers who have imbued an entire squad with belief, a gameplan and synchronised style of play.

Yes, there are many superb players within each squad. Naturally, there will be moments when individuals step up (Lucas Moura’s hat-trick accounted for every goal Tottenham scored against Ajax). Yet it was the collective brilliance which took the breath away, particularly in Liverpool’s destruction of Barcelona where everyone from goalkeeper to stand-in striker played a key role.

Manchester City, a team that finished above both Liverpool and Tottenham in the Premier League, are a further example of why a unified approach is crucial. They have spent lavishly, which has undoubtedly led to their success, but they have also spent wisely. Their record signing, Riyad Mahrez for £60m, is not in the same ballpark as Neymar’s move to Paris.

What separates them from several other of Europe’s super-rich clubs, most notably neighbours Manchester United, is their remarkable unity and cohesion. From the director of football, to the manager and players on the pitch, this is a club where almost everyone is in harmony regarding the on-pitch approach. Where no player appears bigger than the club.

This is true for Pep Guardiola’s Manchester City, for Jurgen Klopp’s Liverpool, for Mauricio Pochettino’s Tottenham, for Erik ten Hag’s Ajax. Meanwhile, PSG continue to struggle in Europe and Juventus might be questioning the wisdom of signing one outstanding individual heading to his mid-30s, when the vast wages and transfer fee might have been put to smarter use.

This is not to dismiss the impact one magnificent player can have. There’s no veiled message here that Cristiano Ronaldo and Lionel Messi, the most celebrated duo in this age of the individual, are – to use the dreaded cliche – overrated. They are two of the greatest footballers who have ever lived, remarkable for both their astonishing ability and durability. It’s our wonderful fortune that they have been born within three years of each other.

Yet for all the Champions League or Liga trophies that pair have hoovered up, look at the players around them too. From unsung heroes to very much sung-about heroes, these were teams graced with plenty of other sublime talents. From Xavi to Modric, Iniesta to Kroos, Piquet to Ramos, Suarez to Bale, and so on. They simply did not win those trophies alone.

Ranked! Liverpool’s 10 best European nights at Anfield since the 1990s

The most exceptional team of the modern era, Guardiola’s Barcelona, combined brilliant individuals with a system and style of play more important than any one man. That the somehow ever-improving Messi is arguably playing better than ever, yet nobody thinks this current Barça side is a match for the 2008/09 vintage, tells you enough.

Because football will always be a team game, first and foremost; a sport where a player can be crucial in winning a contest without registering a goal or an assist. Where on-pitch understanding can trump a one-off talent.

Ahead of the Champions League semi-finals, some hoped for the subplot of the so-called Johan Cruyff final: Ajax against Barcelona in a battle of the two clubs he influenced most. We got the opposite; an all-Premier League affair. The Richard Scudamore final.

Yet in its own way, Tottenham vs Liverpool is a perfect tribute to Cruyff as well. He was a brilliant individual himself who nonetheless strongly believed first and foremost in a team approach. Who, when he was spelling out his 14 ‘rules’ of football, put at the very top of them: “To accomplish things, you have to do them together.”

LIST The 9 best teams that DIDN’T win a thing

QUIZ! Can you name the line-ups from the last all-English Champions League final of 2008?