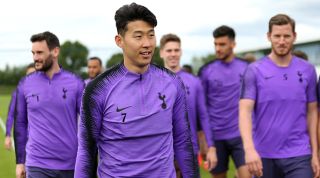 Money is a blessing and a curse for the Premier League. The size of the broadcasting contract may have created useful financial primacy, but it has also encouraged assumptions about English sides which do them a disservice.

Last week, Roberto Mancini was interviewed about Saturday‚Äôs Champions League final and, in among some laboured Brexit jokes, alluded to that wealth and¬†offering it as a silver-bullet diagnosis for the all-English final between Liverpool and Tottenham.

It‚Äôs an argument with some obvious merits, but its holes are difficult to ignore, particularly as neither team is truly a member of the Premier League‚Äôs financial elite. Liverpool spent heavily in the summer of 2018, but those figures were exaggerated by the sale of Philippe Coutinho. Tottenham, their opponents, famously haven‚Äôt signed a player since January 2018. When considering Premier League opulence, these aren‚Äôt the first clubs that come to mind.

Which isn‚Äôt to say that they aren‚Äôt well nourished by the environment ‚Äď it‚Äôs just that they are in a more subtle way. The combative nature of the division‚Äôs summit is encouraging sides to become increasingly flexible, and with five of the top six led by high priests of the modern game, the result is a blend of resources and acumen which the rest of Europe is finding it difficult to subdue.

Call it diversity, call it range; whatever the commodity, it was strongly in evidence during those two semi-finals.

Liverpool should not have overcome Barcelona at Anfield. It was a glorious night, but any dispassionate analysis would acknowledge Bar√ßa as an equal partner. They panicked. They clearly lost their nerve. Their position in the tie became weaker as it became more obvious that they had no strategic response to Liverpool‚Äôs assault. With no alternative to possession football, with no direct or security option to pivot towards, the pressure exerted on them grew, until their opponents eventually capitalised on a succession of mental errors.

It‚Äôs one of the hidden dangers that lurks in leagues with one or two dominant clubs. While those teams may lose games, their experience of suffering through that kind of scenario is scarce. It‚Äôs the same failing annually seen at Paris Saint-Germain and attributed to the competitive imbalance of Ligue 1, but it was just as relevant to Barcelona. In Catalonia, the defeat was doubly unforgivable because of what had happened in Rome¬†12 months before¬†‚Äď but between those two games, what opportunity had Ernesto Valverde‚Äôs players had to apply what they‚Äôd learned¬†from that experience?

What modern football seems to be breeding, with its wealth disparity and competitive imbalance, is almost a Tyson-in-Tokyo scenario, in which teams aren‚Äôt conditioned to play under anything other than their preferred conditions.

Liverpool‚Äôs progress emphasised that. That it occurred without Mohamed Salah and Roberto Firmino, two players thought to be fundamental to Jurgen Klopp‚Äôs style of play, also spoke to the importance of system over personnel. Moreover, it defeats the depiction of this Champions League final as being the consequence of player-based force: that game was a tactical success, a ringing endorsement of Klopp and his ability to exert pressure on an opponent‚Äôs weakest areas.

It also depended on a dexterity which, because of its eclectic nature and attritional style, the Premier League routinely stresses.

Tottenham‚Äôs own comeback probably made that point more vividly. Theirs was a different kind of success, albeit one enabled by similar weaknesses. Ajax spent their European season winning hearts and minds and their attractive, possession-based game was far too hot for Real Madrid and Juventus to handle. And, for much of that semi-final tie, it seemed like it would be for a depleted Tottenham, too.

But both legs exhibited the subliminal strengths and flaws of the two sides. Once Mauricio Pochettino had turned towards a more direct style, which emphasised quick progressions of the ball and was focused around Fernando Llorente, the resulting rise in the game‚Äôs speed appeared to unsettle Erik ten Hag‚Äôs artisans. It wasn‚Äôt anything more crafty than a gear change, the kind of temperament shift seen on Match of the Day every weekend, but the altered rhythm was an alien imposition upon Ajax and they lost their footing.

As they did in the second leg, too. In each match, at almost precisely the same stage, Ajax‚Äôs superiority began to recede; a jittery fear appeared¬†in its place, resulting in turnovers and loose defending. It‚Äôs possible to attribute that to intangibles, but more likely it had its root in a lack of familiarity. Ajax not only averaged close to 60% possession in the 2018/19 Eredivisie, but rarely did they play games during which the conditions ‚Äď either technical or athletic ‚Äď were changed against their will. Like Barcelona, they are built to excel in a certain, narrow way. After all, having a transcendent ideology is the privilege of the dominant. Everyone else has to shift their shape, to adapt to compete.

The conditions within English football certainly prioritise that quality. Manchester City may have a rigid way of playing, but domestically they are good enough not to be limited by that. Tellingly though, for a second straight year, they were eliminated from the Champions League by an English team¬†‚Äď¬†and by one of those sides for whom adaption is a prerequisite.

Affluence does make it easier to exploit these deficiencies. Premier League squads are generally more talented and almost always better paid. Crucially, though, those resources aren‚Äôt used just to perpetuate a single native strategy, but to equip a squad for a journey through a more varied landscape. Tottenham, like Liverpool, need a side which can beat Burnley and Arsenal, Watford and Newcastle. Under the incumbent group of generation-defining managers, that extra utility now seems more pronounced than ever.

Arsene Wenger: "When Arsenal played their first match without me, it felt strange"

While you're here, why not take advantage of our brilliant subscribers' offer? Get 5 copies of the world's greatest football magazine for just ¬£5 ‚Äď the game's greatest stories and finest journalism direct to your door for less than the cost of a London pint. Cheers!