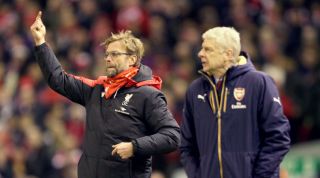 Your legend is what you make it. Legacy, however, is usually decided in post-mortem.

Liverpool have blustered and battled, swaggered and swept all before them domestically and abroad in the past two years - well, nearly all. Their legend is being written every week. Their name, all but etched onto the trophy they’ve coveted since its inception. But we’ll have to wait to know their legacy. That particular story will only begin after Jordan Henderson inevitably lifts the cold, silver frame of the Premier League trophy this May.

For Arsene Wenger’s Invincibles, the legacy has been a strange one. An undefeated season put Arsenal on a permanent podium, for us to compare them to every great side from now until a European Super League engulfs us all. But in the 16 years since Arsenal’s undefeated season, all we’ve done is tear the achievement apart. We never seem to talk about how good the Invincibles were. We talk of how they weren’t that good. It's a funny twist of fate; after all, Chelsea won more games the season after and United won more trophies in 2008.

The 10 longest unbeaten runs in Premier League history – how did Liverpool do?

Liverpool’s conquerors haven’t exactly helped the matter, given that they’ve done the things that Arsenal couldn't back then. There’s a European trophy, for a start, in which the Reds defeated the German, Spanish and French champions on the way to winning. Then there’s the fact that Jurgen Klopp’s side have won all but two games, an elbow in the ribs at the 12 matches Arsenal drew.

But perhaps the most impressive thing about Liverpool’s incredible record this season is just how difficult it’s supposed to be now. This is the era of the top six - not a United/Arsenal duopoly. Every team in the league is tactically so much stronger than they were in 2004. Deep blocks have been born and mastered in that time. Guardiola’s City side have been just as phenomenal as Liverpool, there are relegation battlers this season with players that the top half sides of 16 years ago could scarcely dream of. Liverpool may have lost, but they’ve done so in a far more difficult era, or so some say.

The fact that the Invincibles never lost a game deified the Gunners. But that was never the aim for Wenger.

“I have no medals at home from anything,” he once said. “You come to my home you will be surprised. There is no trophy, no medal, nothing.”

The dream was never to be the greatest side of all time: we just assumed that that’s what the legacy would be. Arsene Wenger dreamed of managing an unbeaten Arsenal side because it was, for him at least, the peak of his philosophy.

Arsenal, essentially, was built on the faith Wenger put in his players. This was a side of misfits and bargains - none of these guys were destined to become world-beaters from a young age - and frankly, the fact that they never lost a match is almost second to the scintillating entertainment they put on every week. Wenger’s impenetrable belief lifted them into the clouds; it turned Thierry Henry from a Serie A flop into the greatest player to ever wear Arsenal’s colours. That self-assurance sparked a 5-1 performance in the San Siro in 2003, brought Arsenal back from the brink against Liverpool at Highbury during that unbeaten season. It's been central to so many beautiful goals. It’s what George Weah himself credited his Ballon d’Or win to.

We associate Arsene Wenger and his crowning Arsenal side with numbers. The 49 games they went without losing, the 26 wins and 12 draws of the 2003-04 season. But really, these are just the page numbers in his achievements. When the Frenchman left Arsenal after 22 years at the helm, none of the tributes were about statistics. Everyone who’d been touched by Arsenal - from Cesc Fabregas to Bob Wilson - spoke of how Wenger had made them feel. Made them believe. He was nicknamed Le Professeur, but far more of a poet.

Klopp’s Liverpool, however, are a mathematical marvel. A tactical masterpiece that can break teams down any which way they choose. They look superhuman; like they’d throw previous champions to the lions, mercilessly. They’re the most powerful, technical and impressive side the league has ever seen.

But that doesn’t take away from what the Invincibles achieved. Their 2004 title isn’t proof that they’re the greatest team of all time - it’s merely the story of a football manager who told everyone his dream, was laughed at, and proved them wrong in the end. It’s a lesson in what can be achieved with pure belief. Hell, even 16 years later, the Invincibles’ glory raises an annual question of whether anyone in our midst is capable of it now.

That’s why they’ll always be compared to our contemporaries - whether deservedly or not. Arsenal did what they did with such style and self-confidence that they made it look like it was nothing. Liverpool have shown that it’s clearly not.