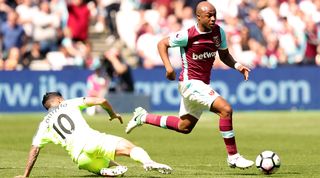 Matches against West Ham United have acted as banana skins for Liverpool in the not-too-distant past.

A shock 3-0 home reverse spelt the beginning of the end for Brendan Rodgers at the start of the 2015/16 season, while a 1-1 draw at the London Stadium in 2019 helped put the skids on last season’s title charge.

However, there’s an argument that neither of these slip-ups are nearly as monumental as another meeting with the Hammers, in which the London club threatened a result which could have had a far more wide-reaching impact.

Towards the end of the 2016-17 season, with Chelsea running away with the title and Spurs sitting comfortably in second, the chasing pack were busy taking it in turns to trip over in their pursuit of Champions League football.

Manchester United had put their eggs in the Europa League basket, albeit not before playing out a goalless draw which threatened to push neighbours City below the line, while Arsenal produced an almost comically bad run of four points from five games in March and April to leave themselves a battle so uphill that it was essentially vertical.

This left Liverpool in pole position, or at least it should have done. A home defeat to Crystal Palace, still their most recent loss at Anfield, was followed by a draw against Southampton in which Fraser Forster kept out a James Milner penalty. Suddenly Jürgen Klopp’s men needed maximum points from their last two games to guarantee a top-four finish.

André #Ayew with the miss of the season contender for #WestHam vs #Liverpool
HOW DID HE NOT SCORE THIS?! #WHULIVpic.twitter.com/bv3F2JQHri— FootyRoom (@footyroom) May 14, 2017

West Ham were tough to predict for most of the season, and the early May meeting was no exception. They’d beaten Spurs the previous week to seal their safety from relegation and mathematically deny their London rivals the title, but Slaven Bilić’s side were equally capable of raising their game once more as they were of downing tools, considering their season over bar the shouting.

Daniel Sturridge settled Liverpool nerves early on, but the 2-2 draw against West Ham at Anfield in December should have been enough to tell them the game was far from over. West Ham would surely have at least one big chance as long at the lead stayed at one, and what a chance it was.

Only André Ayew knows how he missed from a yard out, ignoring the wide-open goal and hitting the post. Twice. Yes, the same post. No, with different shots, somehow.

The Hammers’ then-record signing hadn’t enjoyed the best season, but this was the sort of chance you’d be embarrassed to miss in your work five-a-side game. The cliché of "it was easier to score" often gets brought up, but in reality, it was easier for Ayew to do anything other than what he actually did.

It’s the sort of miss that makes a stadium full of fans rub their eyes, unable to convince themselves that what they just witnessed was real.

Liverpool's Premier League record attempts: how many could they break this season?

Like Yakubu’s howler against South Korea at the 2010 World Cup or Chris Wondolowski’s skied sitter against Belgium in 2014, it’s the sort of miss that can drag a team down under its own weight. West Ham were never likely to recover, and they proceeded to fall to pieces after half-time, shipping three more goals with little in the way of resistance.

Imagine how much changes if he does score, though, and if West Ham hold on for a point or even take all three.

Liverpool’s fate is no longer in their own hands, and the final-day victory over Middlesbrough isn’t enough to help them sneak into the top four.

Mohamed Salah and Andy Robertson still arrive that summer, but Alex Oxlade-Chamberlain stays at Arsenal due to the guarantee of Champions League football.

More crucially, Philippe Coutinho, without elite European football at his disposal, is allowed to leave for Barcelona over the summer. Teething problems with his replacement leave the Reds out of the top four come January, and Virgil van Dijk decides he is better off elsewhere.

The lack of forward progress sees a vocal group of Liverpool fans question whether Klopp is the right man for the job, and the board cave to their demands, replacing the German with Carlo Ancelotti in December. Results pick up, and Liverpool climb back into the Champions League spots by the end of the 2018-19 season, but the gap between them and Manchester City couldn’t be bigger. Loris Karius is still the Reds’ starting goalkeeper. You get the picture.

The entire landscape of English and European football has changed, and it can all be traced back to one man missing the target from a yard out, but those are the fine margins we’re dealing with.

Without Tim Howard spilling a free-kick in 2004, perhaps José Mourinho is merely a solid European coach. Without Matt Taylor missing a penalty for Burnley in 2015, perhaps Riyad Mahrez is back in France and Jamie Vardy is back in the Championship. Football narratives live and die on the smallest things, and it’s not until long after the fact that we realise how defining they really are.

QUIZ Can you name the most valuable players in the world over 30?