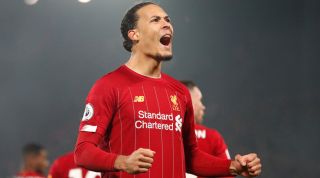 Well, they could still do a treble of Club World Cup, Champions League and Premier League – but the chances of becoming the first team to pick up four major trophies in a season is out of reach for Liverpool after defeat to Chelsea in the FA Cup. (Sorry, Reds fans, we're not including the UEFA Super Cup – or the Community Shield, Man City fans.)

But what records could Liverpool still make this season – and which ones have they already set?

ALSO READ How soon can Liverpool win the Premier League?

The frankly ridiculous 15 goals conceded by Chelsea during Jose Mourinho's debut Premier League campaign may be out of reach (the Reds have now conceded 20) but they remain in with an outside chance of breaking a big record at the other end of the pitch.

Pep Guardiola’s free-scoring City Centurions - get used to seeing them on the list - racked up a whopping 106 goals in 2017/18. That’s 2.7 a game, stats fans, including the three that they scored in the 4-3 defeat to Klopp’s Liverpool that season.

Liverpool have scored 64 in 28 matches so far this campaign - or around 2.3 a game. While not impossible, they'll need to seriously up their attacking potency if they want to surpass City's record, with 43 required in their final 10 matches. Unlikely, of course, but with games against Villa, Brighton and Newcastle still to come, there's still an opportunity to rack up a cricket scoreline or two before the season's end.

And bear in mind that City, having played a game less, are currently on 68 goals...

En route to their record-breaking title, Manchester City broke Chelsea’s record of consecutive wins, recording 18 victories on the trot and putting acres of space between themselves and the chasing pack before Christmas. In doing so, Guardiola became the record-holder for consecutive wins in La Liga, the Bundesliga and Premier League. Not bad.

Liverpool matched this run on gameweek 27 this campaign with a 3-2 home victory over West Ham. Another win over Watford would have been enough to claim the record outright, but it wasn't to be.

Most assists in one season

Trent Alexander-Arnold has been a revelation for his boyhood club since bursting through as a youngster and establishing himself as Liverpool's first-choice right-back. One of the primary sources of creativity in the side, Alexander-Arnold racked up 12 assists in the league last year and he’s already on the same figure for this campaign. He'll need nine more in the final ten games of the season to overtake the Frenchman.

But he also has competition in the bid to end the record held by Henry for 17 years. Manchester City playmaker Kevin De Bruyne has been in robotic form this season and already has 16. This one’s perhaps off the cards - for this season at least - but it ain't over till the strawberry blonde midfielder sings.

The rivalry between City and Liverpool has blown up in recent years. Fuelled by hostile European ties, a straight knock-out fight for the title and a few controversial refereeing decisions - on both sides - Reds fans would love to take this particular record from their rivals, given how celebrated it became at the Etihad when the Citizens achieved the feat.

Liverpool are averaging 2.8 points a game - that’s what happens when you drop four points all season. The maximum they can still amass is 109 points, so Klopp’s side will have to start dropping points at an alarming rate not to reach the three-digit mark. Seems inevitable right now, let alone achievable.

Despite the Watford result, Liverpool remain 22 points clear of 2nd placed City, who have a game in hand. 19 points is the biggest margin that the league has ever been won by before (City's Centurions again, as if we had to tell you). The Reds can beat that still, but how early can they wrap things up?

Klopp's men need a maximum of four wins from their remaining 10 matches in order to take City's crown. From this point would mean they secure the title at the Etihad, against their rivals, on April 5, but it's not the soonest they could win it.

They'll only need two more wins in the event Man City lose their next two matches, as unlikely as that may be. The March 16 clash against fierce local rivals Everton would be the venue for the earliest ever Premier League title win, if things unfold that way.

We English have a fractious relationship with the Germans when it comes to football. There are goals that weren’t goals, 5-1s, shoot-out despair and the small matter of an epic World Cup final in 1966.

But for all their tactical genius, ruthless efficiency and vorsprung durch technik, Germany has never produced a manager to win either a league title, an FA Cup or a League Cup on our shores.

In 2008, Liverpool stopped one of the great unbeaten runs of English football history. Chelsea managed an unbelievable 86 matches stretching over four years without losing a single match at Stamford Bridge, but it all came crashing down with deflected Xabi Alonso winner.

Now, Liverpool are looking to beat that record themselves - however, they still have a long way to go. They’re 55 matches into their unbeaten home run, so they’re looking at another year before they’re challenging Chelsea for that particular record. And to think, it could’ve all ended if Riyad Mahrez had buried that penalty at Anfield last season…

OK, OK, we don’t actually know about this one.

Given the rumours that just won’t die down though, Kylian Mbappé could be on the way to Anfield this summer (does that count as this season?). He surely won’t leave for less than Neymar cost PSG, either.