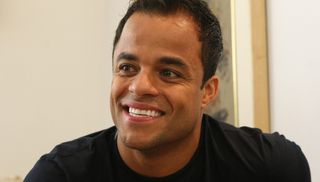 “Ah, the stepovers,” former Roma winger Mancini smiles. “We call them pedaladas in Brazil. They’ve always been my trademark.” So he showed with a stepover frenzy vs Lyon – and specifically Anthony Reveillere – in the 2006/07 Champions League last 16.

How many stepovers did he pull off before knocking the ball past the French full-back and lashing it into the top corner to give Roma a 2-0 lead? Mancini guesses: “Five?” He doesn’t really know. Neither does Reveillere. “I never got a chance to ask him,” Mancini chuckles.

“It was a mix of technique, strength and acceleration – a little bit of everything,” says the Brazilian. “It was a great cross-field ball from Francesco Totti: we may not have been best friends, but we understood each other on the pitch. He put me one-on-one with Reveillere, and I had to go for it.

“We love that sort of thing back home. It comes naturally from our childhood. It’s in our blood: we’re always looking for the pedaladas. Non-Brazilian players try it, but it’s different. When we got past Lyon, we clashed with Manchester United in the quarter-finals [and lost 7-1 in the second leg]. Cristiano Ronaldo was there and he has the skill, but it’s not the same as a Brazilian when he does it.”

Mancini, who also turned out for Milan and Inter, continues: “That was one of the most beautiful goals I’ve ever scored – but not the best. In my first season at Roma, I scored a backheel against Lazio that earned me the name Il Tacco di Dio [the heel of God].

“The funny thing with this goal, though, is that I got an offer from Lyon after leaving Roma...”

This interview originally featured in the October 2012 edition of FourFourTwo magazine. Subscribe!