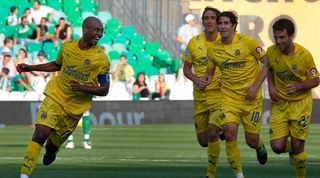 It’s only on reflection that you realise just how good Marcos Senna was.

The focal point of Spain’s Euro 2008-winning side, the midfield heartbeat of Villarreal’s greatest ever team and voted La Liga’s player of the season in 2008, Senna’s list of achievements is not to be sniffed at. This spectacular goal against Real Betis in 2008 was but another feather in his finely plumed cap.

“It was an unforgettable day for me because in winning the match, it really helped Villarreal in the title race. We won, and with a really special goal,” he says of the 16th-minute wonder-strike from range that secured the Yellow Submarine all three points in a narrow 1-0 win, the year they finished second to Real Madrid – 10 points clear of Barcelona.

As Senna admits, the goal was less a moment of opportunist inspiration and more the fruits of a typically crafty, calculated approach: “I thought there was a chance I would score because I’d tried to score from the halfway line in games before that. In fact, a friend of mine told me to keep trying and eventually I would score.”

“I always used to watch our opponents’ games to see the keeper’s positioning. Does he stay back or does he come off his line? In this game I realised that Betis’s goalkeeper [Casto] liked to come quite far off his line, so I knew there’d be an opportunity for me to score. I tried it and when it went in I was very happy.”

The goal may have been a surprise to Casto and even Senna’s manager, Manuel Pellegrini, but not to those who knew the Spain midfielder’s love of a long-range effort. “People knew it was a characteristic of mine but no one knew what I was going to do. Still, it wasn’t a huge surprise for my friends.

“It was one of the most beautiful goals I scored in my career and one I’ll always remember.”

Get your hands on the November 2013 issue of FourFourTwo, featuring our must-read chat with Chelsea manager Jose Mourinho and a revealing sit-down with Manchester United new boy Marouane Fellaini. We grill Dutch legend Ronald Koeman, plus read what the world's former most expensive players had to say about their big-money moves. Subscribe in print or for iPad now.