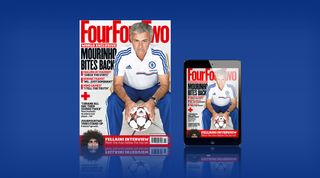 In the new issue of the world’s greatest football magazine - available in print and in a specially-designed-for-iPad version - we get up close and personal with Chelsea's prodical father, Jose Mourinho. Much has since the Portuguese prince's shock departure from Stamford Bridge in September 2007 – indeed, he's lifted another six major trophies with Inter Milan and Real Madrid, while the Blues themselves have tasted Champions League glory too.

But now Mourinho's back, the former self-proclaimed Special One who now denounces himself as "master of nothing". What on earth are we seeing here? Is this really a new, modest Jose or one simply easing himself back into the limelight? Or is it neither of those chilling possibilities?

In a rare exclusive, we get to know the front behind the face as the man himself discusses his legendary player relationships, why he returned to west London, his acrimonious departure from Real Madrid and much more. Has he lost his touch after that troubled spell at the Bernabeu? Not a chance. What about those mind games? Just honesty. And what on earth comes next in life's rich tapestry? The answers come back brash, ballsy and with typical bravado.

And when it comes to larger-than-life characters, it doesn't end there. We sat down with Manchester United new boy Marouane Fellaini for his take on a new beginning at Old Trafford, why he re-united with former boss David Moyes ("believe me, he can be tough"), that famous barnet and what he loves about the Premier League. You'll learn something new, we promise.

Few men can boast being adored by a nation's top three clubs – but Ronald Koeman is one of them. But not only did the Dutch legend blitz the Eredivisie with Ajax, PSV and Feyenoord, he also claimed European Championship glory with his country in 1988. Now managing Feyenoord, 'Snowflake' chatted to us with a few stories to tell from his glitzy 17-year career at the top of European football. So why is he so popular? Could have have managed Manchester City? And what was the secret of early-90s Barcelona? It's all here.

While Gareth Bale's megabucks move to Real Madrid put a dent in the Spanish giants' bank account to the tune of £85m, the Welsh wizard is far from alone in joining a club with a hefty price tag slapped on his head. No, sir. We chat to the former record breakers whose big-money moves ended with mixed results. From £21.5m Samba flop Denilson to Toon treasure Alan Shearer, we've got the big guns covered – and yes, that includes Gianluigi Lentini...

"Gah, they parked the bus today but I bet they're over the moon." No, not a direct quote from Ray Wilkins but two of the exhausted idioms that just wouldn't have a place outside the game as we know it. Did you know, for example, that the former was coined by none other than our man Mou? If you did, never mind, because there's plenty more where they came from...

It isn't too unsurprising to discover that the former player who guzzled two bottles of whisky before a game ultimately saw his career ended after falling off a balcony, drunk as a skunk. That, though, wasn't the half of it where Dinamo Zagreb and their talented playmaker Stef Lamza were concerned. We roll back to the 1960s for tales of intoxication, urination and... intoxication (wait, did we already say that?).

When Farnborough FC's players changed their names to those of footballing legends by deed poll at the beginning of the season, the tabloids tittered as the Skrill South side tried to save their skin. But their unique publicity stunt, in conjunction with a popular bookie, backfired as the League looked on their ploy with disdain. Eventually, five games late, they began the season – and we headed along to get answers from the club in an ultimate identity crisis.

After English clubs were banned from Europe following the Heysel disaster of 1985, officials had a brainwave. How about a new competition for clubs in the top two divisions to play more football and make some cash while they're at it? It'd catch on, wouldn't it? Well, find out for yourselves. As the Simod Cup was reincarnated as the catchy Zenith Data Systems Cup, seven utterly unmemorable finals were thrashed out as disgruntled stars lamented their lack of European gametime. In the end it's fair to say feathers were ruffled...

Why did the journalist go to the comedy club? To try and be funny, of course. So when brave Si Hawkins took his chances on the unforgiving circuit, we thought it a good idea to head along for the ride. As we found out, life as a funny man ain't always so amusing...

If you're still after more, you've got it. We also ask where all the street footballers have disappeared to, interview Brazilian hotshot Fred and pick up some handy hints and tips from the likes of Jack Rodwell, Alex Oxlade-Chamberlain and Seb Larsson in our regular Performance section.