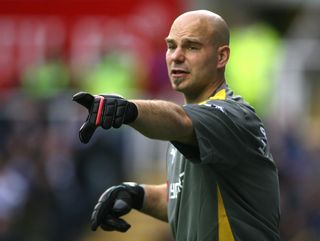 Howdy, Marcus. You’re American. Ever driven a Chevy to the levee?
No. But I have driven a Volkswagen to the levee.

What the hell is a levee, anyway?
It’s kinda like a weir.

Did you drink some whiskey and rye?
No. We did some shooting.

You’re into guns. What’s the best thing you’ve “wasted”?
I’m not great at hunting.The funnest time I had was goose hunting in East Washington with my buddy. It was freezing out, two feet of snow everywhere. We completely failed to bag anything, though.

What’s the best weapon you’ve fired?
My buddy Wade runs a gun shop and sells to the Police Dept. One day he let us loose on the automatic weapons. We loaded and loaded these M16s, our fingers were bleeding, and tried to fire as fast as possible. It was a ridiculous buzz.

Is there a place for firearms in football?
The game wouldn’t last very long if they let me do that. The refs wouldn’t make it back.

Which rival team would you most like to unleash a personal bloodbath on?
Hey, I like everybody. And everybody likes me.

Fair enough. What’s the most baffling English tradition?
I could write another book about this. Bank Holidays. What’s that all about? What’s it got to do with banks? Just because the banks are shut, we can’t go shopping?

Anything else?
British sayings. “Taking the piss”. Fannies. Fanny is something different in America. We have fanny-packs. How does this happen?

Do you prefer death metal or poodle rock?
Death metal. Slipknot are pretty awesome. I like their song Heretic Anthem.

Would you rather listen to non-stop hip-hop on unremovable headphones for six months, or have a limb broken with a mallet?
Limb broken, no question. I’d go for my left hand as I broke my right one last year, and I had trouble wiping my ass.

How do you get rid of spiders in the house? Do you club them to death with a shoe?
I just catch ‘em and throw ‘em outside. Sometimes I use a piece of paper.

When did you last go on a trampoline?
My friend has one for their kids. I was on it three weeks ago.

Did you attempt any stunts?
I try to keep it pretty normal. I just bounce my kids twice as high as usual. If I fool round and land on my butt, that’s an injury you don’t want to explain to the manager.

Do you ever pick food up of the floor and eat it?
I use the three-second rule.

Surely it’s the five-second rule?
We go by the three-second rule in the States. It’s obviously way more hygienic! If it’s down there for five seconds, no way. I used the rule yesterday. A piece of chocolate. Mind you, with chocolate I could leave it an hour.

Do you believe in the paranormal?
My wife thinks we have a ghost in the house, but it’s friendly. The friendly ghosts are OK.

You once dressed up as Obi-Wan Kenobi. What was that all about?
I love Star Wars, and so do my kids. The best one is Return of the Jedi. The Ewoks are unbelievable. And I love the speeders. I’m a big kid anyway.

From the December 2007 issue of FourFourTwo.