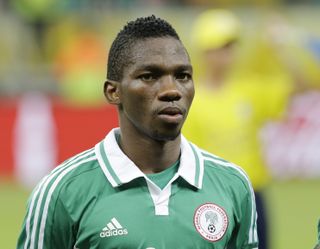 It’s about three-quarters of the way through our chat, in the palatial confines of an office boardroom in busy Central London, that we get to the heart of what Kenneth Omeruo is really all about.

After 20 minutes of laughter, reflection and reminiscing, the beaming smile that is a major characteristic of Omeruo’s persona temporarily subsides, replaced by a look of steely resolve.

We’ve switched from talking about the availability of Nigerian food in Chelsea’s canteen (there is no pounded yam, but Supermalt is permitted as a rare treat) to Omeruo’s long-term ambition. The Nigerian international’s answer is immediate. “I want to be the best centre-back in the world,” he states, as a matter of fact. He is not joking.

There is an interesting contradiction in the 20-year-old’s career to date that says much about the modern game, and the overarching power of European superclubs like Chelsea.

Here is a man who has already played and won an African Nations Cup with his country, but who has never played a game for his club. He’s played against some of the world’s best players – Didier Drogba, Luis Suarez, Edinson Cavani and Javier Hernandez – “quick, intelligent, good movement; the best player I’ve ever played against” – yet could probably take the District Line to Fulham Broadway and walk to Stamford Bridge without being recognised.

Omeruo hasn’t so much as made the bench for his parent club, but with his resilient, composed defending and precociously talented raw ability he’s already helped guide Nigeria to a World Cup. Kenneth Omeruo’s is a career going almost in reverse – he’s arguably the best Chelsea player you’ve never heard of.

So who is this young defender deemed so good by Jose Mourinho that he recently ordered him to stop training with the reserves?

Sat at a varnished oak desk looking relaxed in a Nike tracksuit and hoodie, PS Vita to hand and a bulky gold watch the only conspicuous clue this is a Premier League footballer, Omeruo starts sharing his life story and the journey that took him from Nigeria’s backstreets to one of Europe’s major clubs.

From Abuja to the Bridge

First things first: setting the Internet straight. “I was born in Abia state,” says Omeruo, proving once and for all that you shouldn’t believe all you read on Wikipedia, which lists his place of birth as Kaduna. “I actually grew up in Abuja. I grew up like any normal kid, going to school and playing football with friends. Back then I used to be a striker, but later I decided to play defensive and I saw that I could actually be good.”

With any player who turns professional, there’s that Eureka moment when he suddenly realises he might have a genuine chance of making it. For Omeruo, it came in 2008.

“I grew up playing alongside people older than me. They brought me in to play once in a while and I could see I was improving. From small you could see I was actually good at playing football and it became what I really wanted to do. So in 2008 I went for trials to join Nigeria squad for the U17 World Cup. It was really difficult. On the last day I was called as one of the players that would represent Nigeria and yeah that was great for me. I was happy and I give thanks to God for the opportunity to be part of that team.”

If passing the trials was tough enough, what makes it even more impressive is that Omeruo, who can also play right-back, didn’t have a club at the time. “Yeah it was really surprising. A lot of people were like ‘where does he play?’ But I didn’t actually have a club! It was only after the trials that I was picked up.”

Omeruo helped Nigeria finish runners-up to Switzerland at the 2009 U17 World Cup, in a tournament the West African nation hosted. Watching scouts sat up and took notice. Villarreal and Anderlecht made offers. Omeruo chose the latter, but failed to impress sufficiently to warrant a contract. After two months he returned to Nigeria, joining Sunshine Stars.

The sun shined on Omeruo however, when what looked like a fading dream of playing in Europe suddenly took a turn for the brighter. Standard Liege had spotted this tall, rangy but strong centre-back while in Anderlecht’s youth setup, and offered him a pre-contract. His career was back on track.

What happened next however, is beyond anything Omeruo could have imagined in his wildest dreams. In the run-up to the 2011 U20 World Cup, Chelsea came calling.

“I first found out during the preparations for the U20 World Cup,” Omeruo confirms, struggling to contain a grin of excitement similar to the one you imagine the lifelong Chelsea fan let out when hearing the news the first time. “I got a confirmation call after the tournament. At first I didn’t really believe it because I wasn’t expecting that at that time,” he laughs. “But it turned out to be real.”

“I had only played for Standard reserves at that time but I left when my pre-contract was finished. They were surprised. When I talked to some of my teammates on Facebook, they were like “So you’re playing at Chelsea now?” And I was like “Yeah!” he chuckles. "It was great.”

Chelsea’s immense popularity in Nigeria ensured the deal made major headlines back home. “It was really big news,” beams Omeruo. “People were happy that another Nigerian is at Chelsea again. For my family they were really happy and supportive. It feels great to actually get to that stage you’ve been dreaming about.”

The London club loaned the 21-year-old to Eredivisie outfit ADO Den Haag for the 2012/13 season. Omeruo - calm, a good reader of the game and committed in the tackle - adapted to Dutch football quickly, and the experience gained and promise shown soon earned him international acclaim. “Playing in Holland wasn’t difficult at all because they play the kind of football I like,” Omeruo says with an assured manner that is noticeable throughout. “They play good football, everyone could play, they can keep the ball. It was really good.”

The pinnacle of Omeruo’s young career to date came midway through his loan season, when he earned a surprise call-up to Nigeria’s African Cup of Nations 2013 squad. His call-up, alongside a number of other domestic and inexperienced players, caused a major stir in Nigeria, with coach Stephen Keshi coming in for fierce criticism. But Keshi knew. After a 1-1 draw with Burkina Faso in the opening game, Super Eagles captain Joseph Yobo was dropped. Omeruo got his chance. He didn’t look back.

“Going into the Nations Cup we were just going to take each game as it comes. You know: try to qualify. But after playing against Ivory Coast in the quarter-finals, we knew this was our chance. After beating Ivory Coast you shouldn’t miss out winning the trophy because, I don’t think the opportunity will come like that again. I was happy we could grab the opportunity and actually win it.”

Keshi’s faith in the youngster was repaid. Nigeria went on to win the tournament, only the third in their history. Omeruo thanks the ‘Big Boss’ for giving him his big break. “It was really great toplay under Keshi. He is like a father. And working with a coach that actually played the same position that I’m playing, for him to pick me means he saw something. You need that as a coach and as a player. He knew I was good enough to play for him. For him to give me that opportunity, that trust, that confidence. I just have to give everything to make his decision the right one.”

One of Omeruo’s personal tournament highlights was a brief word with Chelsea legend Didier Drogba, who he sounded out for advice. “I spoke to him immediately after the Ivory Coast game. He told me that Chelsea is a good place and that I should try to stay and play to be in the team. Playing against him was great,” he laughs. “You could see why he is such a big player. I think he was Africa’s best at that period.”

Keeping Luis Suarez off the scoresheet in a game against Uruguay at the Confederations Cup was another high point. “I really loved that game!” Omeruo enthuses. “Despite us losing 2-1, as players we gave a lot. We gave a lot to try to win that game. It was actually good. I felt good playing against Suarez. To know he didn’t score makes you think you did your job well. Yeah, it wasn’t a bad game.”

For Omeruo, stepping up into the Chelsea team is now the goal. A loan to Middlesbrough offers him a chance to stake his claim under the watchful eye of Mourinho confidant Aitor Karanka. “For now I just have to try to play. It’s important to just play.” A loan move should prove beneficial, to Nigeria’s World Cup hopes, too.

With John Terry winding down and persistent uncertainty surrounding David Luiz’s future, there’s an opportunity there - a gap opening up in Chelsea’s defence with Omeruo’s name on it.

A successful spell on Teesside and consistent performances at the World Cup could propel Omeruo into first-team contention, with Mourinho privately thought to have high hopes for the youngster. Given his fierce ambition and achievements to date, there’s a good chance he could seize the opportunity, as he has at every point in his career so far.