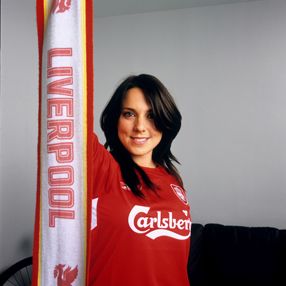 As a kid, Mel C bravely walked through Manchester city centre in a Liverpool FC jacket.

The former Spice Girl-turned-solo star can’t recall the exact date, but she reckons it must have been sometime in the mid-’80s because she was wearing LFC’s ‘famous’ grey colours with stylish red piping. “I remember it was an Adidas one and I used to wear it everywhere,” she laughs. “I looked the business.”

But as she paraded proudly from shop to shop, a moronic Manchester United fan fired a well-aimed volley of phlegm in her direction. The emotional scars run deep. “I couldn’t believe it,” she gasps. “Charming, wasn’t it? Normally, I’d never go shopping in Manchester on a Saturday afternoon simply because I was a Liverpool fan.

"And the one time I made the mistake of going, I got spat at. Fair enough though – I suppose I was asking for it, walking around Manchester in a Liverpool coat. But now, with United, it’s pure hatred.”

When the Spice Girls first gatecrashed the charts with single Wannabe in a blur of hair and leisure wear in 1996, it was Mel C (real name Melanie Chisholm) who sported the Liverpool strip. Baby (Spurs), Scary (Leeds), Posh (Manchester United) and Ginger (Watford) might have pledged an allegiance to one team or another, but the claims always rang hollow.

With Mel C, however, there seemed a genuine passion. She was even nicknamed Sporty.

“Most of my family are Liverpool fans,” she says proudly, reclining on a sofa in her PR’s west London office. “I was always watching the games on telly with my dad. Going to a match was a bit of a luxury we couldn’t afford as kids, so we had to make do with the TV for a while.

"IT WAS ALWAYS A RITUAL"

"But watching the game on a Sunday afternoon was always a bit of a ritual in our house – it still is really. Even my nana would sit down and watch the game. It brought us all together.”

Mel C grew up in the 1980s, during one of Liverpool’s golden eras when the club developed a fondly-remembered Midas touch, grabbing trophies on an almost yearly basis both at home and abroad. From her sofa, she fell in love with the medal-laden likes of Bruce Grobbelaar, Ronnie Whelan and Alan Hansen.

“I’ve been really spoilt,” she admits. “They were the glory days – Ian Rush, Kenny Dalglish, Graeme Souness, Phil Neal… funnily enough, when I was young I wanted to be a goalkeeper just because of Bruce Grobbelaar, but I think it was the whole showman side of it. I loved it when he used to walk on his hands up and down the pitch. He was a great. But I was too young to find those players sexy.”

Her first live Anfield experience didn’t come until the mid-’90s when her brother accompanied her to an FA Cup game against Charlton. It also gave her a first taste of TV fame. “We sat on the Kop but we were quite near the front, only about two rows back,” she recalls.

"I WAS MORE PROUD OF MOTD THAN TOTP"

“In the second half, we scored and that night I was on Match Of The Day, jumping up and shouting at the top of my lungs. It’s probably my proudest moment. I was more proud of being on Match Of The Day than bloody Top Of The Pops.”

Once the Spice Girls had pushed the global superstardom button, Chisholm’s association with Anfield was blasted across the world. Sales of Liverpool shirts with the word ‘Sporty’ emblazoned across the back went through the roof in Japan. Inevitably, her glamorous Liverpool heroes – David James, Steve McManaman, Jamie Redknapp et al – were christened ‘The Spice Boys’.

Later, Chisholm was convinced to walk onto the Manchester United turf with Posh for a half-time �presentation. Having forgotten that formative moment in Manchester city centre, albeit briefly, she was greeted with a barrage of abuse. “It was so embarrassing,” she laughs. “Old Trafford was packed and every single supporter started shouting, ‘You Scouse bastard!’
It’s still probably one of my fondest football memories though.”

It was also the legendary game where Victoria and David Beckham’s romance enjoyed its first passionate flourishes. Chisholm laughs. “Yeah. My hate for Man United subsided a little when Victoria started going out with David. I had to stop and think, ‘Well you know what, I’ll let you off even though you play for Man U’.” Of course, rumour has it that Posh Spice actually went there with the intention of disco-lunging at Ryan Giggs. So, Melanie… “No comment. Ha, ha!”

Whatever the truth, Chisholm quickly struck up a friendship with Goldenballs, supporting the couple during the media storm that accompanied Becks’ sending off against Argentina in the 1998 World Cup. “We were watching the game in a bar in New York and we couldn’t believe it,” she says.

“It was a very difficult time because Victoria was really worried and you couldn’t hide from it, it was everywhere. It impacted on the band a bit too. We were thousands of miles away from home and we were getting all this attention over it. But we all stuck together. We all felt really protective over David.”

If Mr and Mrs Beckham’s departure for Madrid made it easier for Chisholm to hate Man United again, it didn’t help Liverpool’s performances on the pitch. She admits that the European glories of the ’70s and ’80s are a long way off, but she’s a big fan of Rafael Benitez’s management style.

“It’s been frustrating recently to be a Liverpool fan, because we seem to have that eternal optimism,” she says. “We always think that next season is going to be our year. But saying that, I think we’re in a really good position with Benitez. The players he’s brought in have been pretty impressive, especially [Fernando] Morientes who’s brilliant. I love [Djibril] Cisse as well.

I’m just hoping that we’re lulling people into a false sense of security, so that next season we can surprise everyone and give Chelsea, United and Arsenal a real run for their money’.”

From the May 2005 issue ofFourFourTwo.