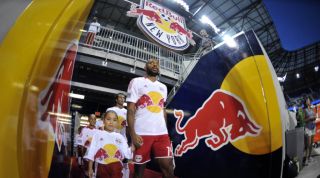 Red Bull gives you wings, or so they say. Ten years to the day since MetroStars were rebranded as New York Red Bulls, their supporters have seen the wings clipped, let loose, clipped again, and now on a steady flight to where they believe they belong. Finally.

Expectancy is one of soccer’s greatest hindrances, and throughout its 21-year history, this franchise has carried it in abundance. When New York/New Jersey MetroStars were founded in 1995 and ahead of the inaugural season a year later, the overriding belief was that success would soon follow.

It didn’t materialize; the average attendance at Giants Stadium dropped from 23,898 in the inaugural 1996 season to 14,706 just four seasons later, with just two MLS playoff quarterfinal appearances in that period.

The high-profile head coaches came and went, namely Carlos Queiroz and Carlos Alberto Parreira, and so did the players, Lothar Matthaus and Roberto Donadoni among them.

By 2006, eight head coaches had gone through the revolving doors, and the MetroStars had topped the Eastern Conference just once, going out at the playoff semifinals stage in 2000.

The franchise took their name too literally, and each MetroStars rebuild on the pitch during that decade was centered around marquee players who more often than not disappointed.

Then, on March 9, 2006, Anschutz Entertainment Group announced the sale of the MetroStars, one of five MLS teams it owned at the time, to Red Bull Co. Ltd. The team was rebranded, the logo changed, the uniform given a fresh colorway, and the groundbreaking for a soccer-only stadium was just around the corner.

Outside and inside of the franchise, there was much derision towards the naming, but fans were used to corporate branding. The MetroStars were the sporty cousin of media company MetroMedia, whose high-ranking executives were franchise co-owners Stuart Subotnick and John Kluge, after Nike’s proposal of MetroFlash was struck down.

Still, the 2006 rebrand was enough to turn some fans away for good. Mark Fishkin, a season ticket holder since 1996 and host of the Seeing Red podcast, remembers the time well.

“Frankly, most of the fans were in shock in early 2006 at the time of the sale,” he tells FourFourTwo. “Not that the MetroStars had exceeded expectations on the field or at the gate in cavernous Giants Stadium, but the team had built a concentrated, rabid fan base in their first decade.

“Many fans left, never to return. Some fans accepted the change and stayed. A club named for a consumer product will always turn off fans. Outside the soccer bubble (and among opposing fans) there's plenty of derision over the name.

“I don't think there's another club outside of the Washington Redskins side that has as much fan angst as to how to refer to the team.”

Just as in 1995, expectation arrived. There was little doubt that the New York Red Bulls were a vehicle for an energy drink company, but the wheels were in motion to race through MLS after the San Jose Earthquakes and the LA Galaxy had won four of the previous five titles.

But there was no clean road to success. Local politicians were upset that the state of New Jersey had no mention in the team’s name, despite it financing the new stadium.

“Their new name may be Red Bull New York, but striking New Jersey from their name seems to be a different kind of bull altogether,” said Brendan Gilfillan at the time, a spokesman for then-New Jersey Governor Jon Corzine.

The negative tone was loud, but the positives were even louder, and they came from the most recognizable faces at the club.

“We are associating ourselves with a world-renowned brand that is synonymous with creative, innovative and unique marketing,” said then-general manager Alexi Lalas. “All the resources of Red Bull will be brought to beat to market the Red Bulls. I’m excited.”

Buzzwords galore, but at the time, the only window into predicting future successes and failures of the club was through Austrian club Red Bull Salzburg, the company’s only other soccer venture at the time.

Bought in 2005, SV Austria Salzburg had their name, colors, and history wiped out and rebranded. The new club website initially claimed it was founded in 2005, but was ordered to remove the line by the Austrian Football Association, while they were also forced to alter the club logo, which donned Red Bull wings, for European competition. They even hired and fired that man, Matthaus, in the space of one year, despite co-leading them to the Austrian title.

Angry supporters formed an off-shoot club with the original name, and after five promotions since 2006, they sit just one division away from Red Bull Salzburg in the Austrian pyramid.

Taking the good with the bad

That much opposition, fan angst and refusal to accept corporate sovereignty was more than enough to worry both New York Red Bulls and neutral MLS fans that a repeat was on the cards. But with the sobering Salzburg experience under their belt, Red Bull took the blinders off. They had learned their lesson.

To many, they recognized the relationship between team and fan, and worked hard in ensuring MetroStars supporters’ groups were respected and given a voice in the new era. This, after groups like the Empire Supporters’ Club felt they were ignored in large parts by the franchise pre-Red Bull branding, was a welcome effort.

That wasn't the only plus. Red Bull’s purchase of MetroStars from AEG for a reported $100 million included 50 percent of the new 25,000-seat stadium, which, after some delays, opened in 2010.

Red Bull Arena, Fishkin says, has been the major positives of the rebrand.

“Say what you want about the Red Bull empire, but the best change was the building of the best soccer-specific stadium in the United States.

“Yes, Red Bull Arena is built on a former industrial brownfield, but as the other teams in the region have found out, finding room to play in this market is a real challenge.

“In addition, the top-notch training facility in suburban Hanover, N.J., has been a massive asset to the first team, the reserves, and the highly-regarded academy, which didn't exist in the MetroStars days.

“Neither MetroMedia nor AEG invested in the way Red Bull has in the club,” Fishkin adds.

Rebranding, investment and ownership aside, the supporters want success on the pitch. Did it arrive post-2006? The investment caused a splash, but not of champagne in the MLS Cup.

They were runners-up in 2008, and despite topping the Eastern Conference in 2010, 2013 and 2015 (winning the Supporters’ Shield in the latter two seasons), they did not pass the semfinals stage in the playoffs.

Now, after Thierry Henry, Tim Cahill, Juan Pablo Angel, Juninho and the like made individual headlines, the Red Bulls are a team without stars. The rebirth is not what you would expect from a team owned by a multibillion-dollar corporation, but it seems to be working.

Last year, the Red Bulls had just four players in the top 100 earners in MLS, but were still the highest-ranking side in the league. Their highest earner, Bradley Wright-Phillips at $660,000, was 34th in that list.

“Both the MetroStars and Red Bulls have been addicted to reinvention, with 14 coaches and 10 sporting directors over 20-plus seasons,” Fishkin adds.

“But the current administration is preaching the mantra of consistency leading to success. Should sporting director Ali Curtis and head coach Jesse Marsch stay into 2018, many jaded Red Bull fans will believe it's for real.”

Mike Petke, who had delivered the Red Bulls their first piece of silverware in 2013, was a victim of that reinvention habit in the off-season before MLS 2015, but Marsch’s back-to-basics, close-knit side look refreshed. But it started with doubt.

Upon arriving, Marsch described the team’s plans as “like an energy drink”. Not the best motivator for supporters with a sharp eye for dreary corporate jargon, but as with any head coach, results were his litmus test.

They were 18-10-6 (60 pts.) in the Eastern Conference in 2015, and despite losing Matt Miazga to Chelsea this winter, the outlook is bright. The 2016 season is recognized as Gonzalo Veron’s time to shine; Sacha Kljestan should build on a fine second-half to last term, while defender Ronald Zubar will look to start afresh after an injury-hampered 2015.

Still, Marsch repeatedly speaks of the steps they need to take to reach that MLS Cup target, downplaying “grandiose goals.”

That is his way of thawing expectancy. After 21 years of promise, that may well be this side’s best bet.