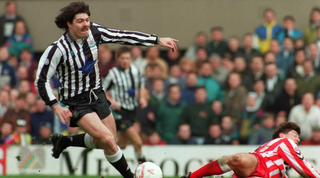 Striker Micky Quinn celebrated a little too wildly following an impressive Newcastle debut in a 5-2 comeback win over Leeds United. The Englishman had just joined the second-tier side from Portsmouth in the summer of 1989 for what was then a whopping £800,000 transfer fee.

After Quinn put his new club in front from the penalty spot after 18 minutes, the Magpies then fell behind to strikes from Bobby Davidson and Iain Baird.

But Quinn added two second-half goals to give Newcastle the lead again, before completing a four-goal haul with a one-on-one following John Gallacher’s fourth.

After an impressive debut win, which made the striker an instant hero at St James’ Park, Quinn went out drinking with his father in his hotel which led to a minor confrontation.

In the May issue of FourFourTwo, on sale now, Quinn explains: “That night, I was staying at a Holiday Inn, my dad was there and we had a few drinks. It got to 2am and the toilets were two floors down.

“There were three lifts, but two weren’t working and someone had put a pot plant next to the lift. I thought, ‘F**k this, I can’t wait’ and started peeing in the pot.

“The manager of the hotel came over, on my shoulder like a copper. He said, “Micky, if you score another four goals next week, bonny lad, you can have a s**t in that pot!”

“It could only happen in Newcastle – I’d be arrested anywhere else!”

Those four goals against Leeds were the sign of things to come for Quinn at St James’ Park, as the Englishman went on to score 39 goals in all competitions, helping the Magpies reach the Second Division play-offs that year but they lost out to arch-rivals Sunderland.

Quinn’s second season in Newcastle saw him net another 20 goals but could only fire his club to a mid-table finish, while a frustrating knee injury and a falling-out with new manager Kevin Keegan saw him leave the club in 1992 to join Coventry City.

Despite a sad end to his career in the north-east, Quinn believes he is still held in high regard by the Newcastle faithful.

He added: “I spent three years there and it was special. People never forget you.

“I can travel anywhere in the world and be recognised by Geordies. That was my happiest time as a footballer.”

Read the full interview with Micky Quinn in the May 2020 issue of FourFourTwo magazine, available in shops and online from Wednesday April 1. Our new magazine looks at how Cristiano Ronaldo came to the brink of setting an all-time international goalscoring record, reveals the 50 best players in the EFL, looks back on Marco van Basten and Euro 88, brings you the inside story from Greece’s unlikely victory at Euro 2004, takes in the rise of Bruno Fernandes and the fall of Michel Platini, and discovers the background of Bucharest’s brutal derby. We also chat to Andy Cole, Lukas Podolski, Ramires and more.