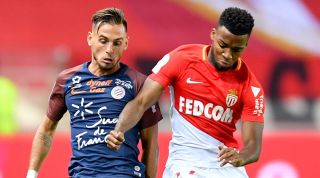 The French defender has produced a string of impressive performances in Ligue 1 for Montpellier this season, catching the attentions of Bolivian fans who think he should be called up to their national team.

Unfortunately for them, Aguilar has no links to the South American nation whatsoever – but that didn't stop the Bolivian FA from getting in touch.

"It's something very strange (laughs). It all started from Football Manager. In the game I have Bolivia as a second nationality.

"In the past year I already had messages from Bolivians after my matches. After my match vs PSG, things increased crazily. I got a lot of messages.

"On TV in Bolivia they said I was eligible for the Bolivia national team. I had to publish a statement on my Facebook page to explain that I have never been Bolivian. My mother is French and my father Spanish."

In the comments below his Facebook statement, Bolivia's Football Manager database supervisor Daniel Dionisi apologised for the error and says Aguilar's info will be updated accordingly for FM 2018. (Released on November 10, by the way. Calendar countdowns at the ready.)